What we’ve been doing today

Hubby has been annoyed about the state of our front gates, especially since he paid over the odds for WPB (waterproof boiling) plywood, or Marine Ply.
You might remember them from May 2018 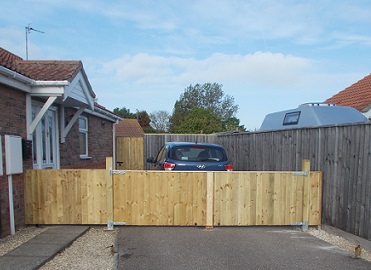 The idea was that in the summer we could lave the front door open to let Maggie come and go as she pleased, but keep her safe as she couldn’t get onto the road. They have lasted well, but on the inside, ie the bit that you can’t see and where Hubby had used the plywood, despite using heavy duty preservative the water got in and the panels not only started to warp, but split and began to disintegrate. To be honest, it looked like best flaky pastry as it fell apart in your hand, layer by layer!
Today he has taken it all off, just leaving the original featherboard gates and will get some tannalised battens to reinforce them diagonally on the inside.

His timing was perfect as dinner was ready by the time he’d finished and cleared everything away.
McCheese today. We haven’t had one for a while and I made one big enough for both of us to have with veg on the side.
I am going to have to invest in some new cooking dishes pretty soon though as these ceramic ones are cracking more every time I use them. Eventually they’ll separate (bit like his gates actually!) and the contents will end up on the floor.

Pictures taken with my phone

Being Monday, it was phone in for SW this morning and I am pleased to say that I have maintained the same as last week and the week before, so still within target.
I’m especially pleased this week as I dipped the wrong side around Thursday last week so I have been making a full effort to get back on plan. I have to be honest, it’s easy enough to lose the weight at the onset provided you don’t expect instant results and are prepared to change not only your eating habits but your attitude to weight loss, but staying within that six pound window is tough.

I’m really proud of this picture originally taken in November 2016 after my first surgery but before my radiotherapy began. I was doing so well and only had another couple of pounds to lose to achieve a loss of 3 stone. I never got there as I was asked not to lose any more weight because it affected the lining up for my treatments.
Now I am where I was, so shall I try for those extra pounds? Maybe, but as I’m stable now, I don’t think I’ll rock the boat (which is where this picture was taken) !

I am a retired number cruncher with a vivid imagination and wacky sense of humour which extends to short stories and poetry. I love to cook and am a bit of a dog whisperer as I get on better with them than people sometimes! We have recently lost our beloved dog Maggie who adopted us as a 7 week old pup in March 2005. We decided to have a photo put on canvas as we had for her predecessor Barney, and now have three pictures of our fur babies on the wall as we found a snapshot of my GSD so had hers done too. From 2014 to 2017 'Home' was a 41 foot narrow boat where we made strong friendships both on and off the water. We were close to nature enjoying swan and duck families for neighbours, and it was a fascinating chapter in our lives. We now reside in a small bungalow on the Lincolnshire coast where we have forged new friendships and interests.
View all posts by pensitivity101 →
This entry was posted in diary, Monday Motivation, My life and tagged chit chat, Monday Motivation. Bookmark the permalink.

22 Responses to What we’ve been doing today