I’ve had a few comments about weever fish after my post yesterday and it would appear several of my readers aren’t familiar with them.

As a child, I remember my parents, especially my father, emphasising we wore those jelly type sandals on the beach in case there were weever fish present in the sand.

I think I was lucky and never got stung by one, though Hubby did when he was very young when he was in Singapore.

Weever fish bury themselves in the sand and you may notice their eyes and dorsal fin on the surface. Image from internet 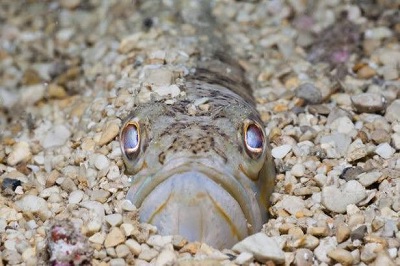 Lesser weever fish occur in the eastern Atlantic from the North Sea around the British Isles to Morocco and Madeira, and in the Mediterranean. We’re on the East coast so its no surprise they are present here. 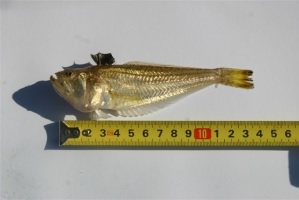 They aren’t that big, usually less than 15cm, but the sting is intense and pain reaches its peak in about half an hour before diminishing, though it can continue for up to 24 hours.
The best first aid is to wash the wound thoroughly then soak it in very hot water  (40ºC or 104º F) for at least an hour. Obviously if you’re on the beach when you get stung, this could prove difficult, so it makes sense to try to avoid them if at all possible.
In light of these little monsters being present on our beaches, we won’t be taking Maggie down for a paddle.

I am a retired number cruncher with a vivid imagination and wacky sense of humour which extends to short stories and poetry. I love to cook and am a bit of a dog whisperer as I get on better with them than people sometimes! We have recently lost our beloved dog Maggie who adopted us as a 7 week old pup in March 2005. We decided to have a photo put on canvas as we had for her predecessor Barney, and now have three pictures of our fur babies on the wall as we found a snapshot of my GSD so had hers done too. From 2014 to 2017 'Home' was a 41 foot narrow boat where we made strong friendships both on and off the water. We were close to nature enjoying swan and duck families for neighbours, and it was a fascinating chapter in our lives. We now reside in a small bungalow on the Lincolnshire coast where we have forged new friendships and interests.
View all posts by pensitivity101 →
This entry was posted in current events, nature and tagged beach, weever fish. Bookmark the permalink.