It’s all coming along rather splendidly out back, so I’ve just take a few pictures for you.
You may recall we cut our rose bushes right back last year and all three are doing OK.
It is the red one that’s sluggish, and finally we have one bud coming through, possibly two.
The ancient mariner has LOADS of buds on it and will be an absolute picture when the pink showy blooms come out. For now though, it’s all green!

Our yellow Peace bush is the first to flower and there is another waiting in the wings to come forth. I’m really pleased because last year we had nothing. 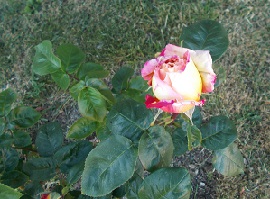 Our flower bed is a mass of colour, sadly not shown to its full advantage in my photo 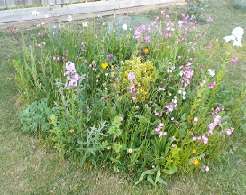 We’ve let it go wild to do its own thing and it’s lovely to see bees and butterflies coming to visit. The buddliah is leafy, but no flowers yet. 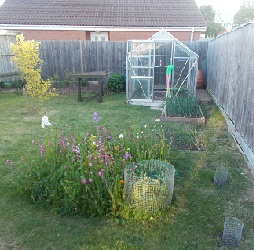 The greenhouse is flourishing with a beetroot, second batch of radishes, carrots, swede, brussel sprouts, broccoli, cucumber, peppers, a stray green bean plant and some late comer tomatoes (latter two out of shot) 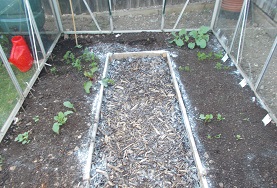 The potatoes are also doing well in the junk plot, especially alongside our mint plant (on the left at the back behind the small conifer) which is four times the size it was last year.

Coming back indoors I saw this: 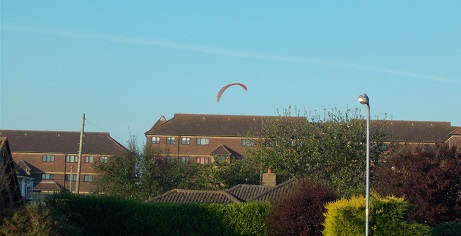 Yep, more wind surfers on the beach, and apparently the ice cream parlour and one of the cafes on the prom has opened.
Bank holiday this weekend, so no doubt we shall be seeing more of the above and this……..

Visitors vans parked on the slip way up to the prom intended for emergency vehicles.

I am a retired number cruncher with a vivid imagination and wacky sense of humour which extends to short stories and poetry. I love to cook and am a bit of a dog whisperer as I get on better with them than people sometimes! We have recently lost our beloved dog Maggie who adopted us as a 7 week old pup in March 2005. We decided to have a photo put on canvas as we had for her predecessor Barney, and now have three pictures of our fur babies on the wall as we found a snapshot of my GSD so had hers done too. From 2014 to 2017 'Home' was a 41 foot narrow boat where we made strong friendships both on and off the water. We were close to nature enjoying swan and duck families for neighbours, and it was a fascinating chapter in our lives. We now reside in a small bungalow on the Lincolnshire coast where we have forged new friendships and interests.
View all posts by pensitivity101 →
This entry was posted in diary, home, veg and garden and tagged veg and garden. Bookmark the permalink.