Good to see Frank back with his Tuesday Photo Challenge. You can find out more by clicking on the link below:
https://wordpress.com/read/feeds/43011194/posts/2711620412

I’m returning to our days on the boat for this.
Our first trip up river and through 17 locks was in July 2015 when we attended the Boat Festival in Stratford Upon Avon. 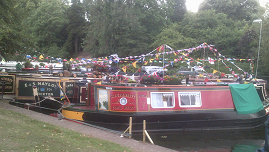 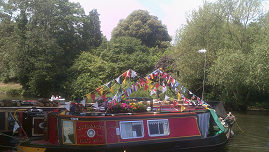 The atmosphere was terrific and we had a wonderful time, so much so that we decided to go back the following month.
Ah. Memo to self:
Do not go to Stratford Upon Avon in the school holidays or height of the Summer Season.

Whilst we still enjoyed the trip and were lucky to find a lovely place to berth, we got thumped by two ladies in a rowing boat who weren’t looking where they were going and a group of lads under the influence found it hysterically funny when they rammed into us in a  motor boat. I legged it up to the rental company concerned who not only called them in early, but also retained their deposit.

This is one of my favourite pictures of the boat which was taken in August 2015.

We went up several other times, each one different to the last, but each time we were able to berth on the river with no difficulty. 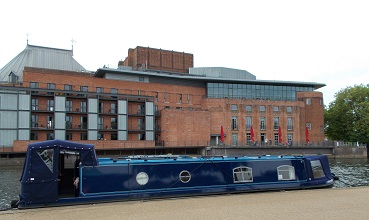 It was a good life, and what took just over an hour in the car took 3 or 4 days by boat depending where we stopped for the night. Wonderful memories.

I am a retired number cruncher with a vivid imagination and wacky sense of humour which extends to short stories and poetry. I love to cook and am a bit of a dog whisperer as I get on better with them than people sometimes! We have recently lost our beloved dog Maggie who adopted us as a 7 week old pup in March 2005. We decided to have a photo put on canvas as we had for her predecessor Barney, and now have three pictures of our fur babies on the wall as we found a snapshot of my GSD so had hers done too. From 2014 to 2017 'Home' was a 41 foot narrow boat where we made strong friendships both on and off the water. We were close to nature enjoying swan and duck families for neighbours, and it was a fascinating chapter in our lives. We now reside in a small bungalow on the Lincolnshire coast where we have forged new friendships and interests.
View all posts by pensitivity101 →
This entry was posted in blogging, Challenge, Photos and tagged Tuesday photo challenge. Bookmark the permalink.