A Walk in the Park 17th May

We’ve had a social day today, from a distance of course, starting off with elevenses on the drive with our neighbour. The neighbour whose wife died at Easter was walking past so we invited him to join us and spent a pleasant hour or so chinning about anything, everything and nothing in particular over tea/coffee and biscuits with our chairs suitably placed. He was looking forward to a nice chicken and ham pie for his dinner with cauliflower, peas and new potatoes.
We settled on beans on toast with an egg followed by ice cream.

We decided to risk a walk in the park as it was such a lovely afternoon. There was no-one in our road, but when we approached the corner, we heard voices. Two guys were chatting on the path and made room for us to pass.
Coming towards us was a man and his dog who turned left down the cut through. Behind him was a gentleman pushing a lady in a wheelchair and across the road was a lady with two dogs coming down from the beach, both heading towards the park entrance.
Behind us now was another couple with their dog, so we timed it right to cross the road and slip in behind the the others who had now entered the park ahead of us.
There were some people chatting about the model boats on the lake, people crossing the car park, and others walking along the pathway round the lake itself in both directions. 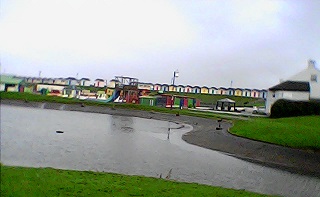 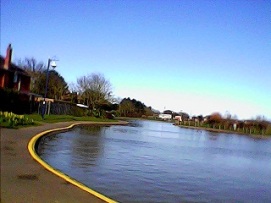 However, there was plenty of space between everybody so we walked to the right (picture on the left) and looped round.

We have a new brood of goslings as they were too small to be ones we’ve seen before.
Mum and Dad were watching the black thing with four legs and 2 tall things with two legs, but no hissing ensued and I got close enough to take these with my phone, but they’re not very good shots. 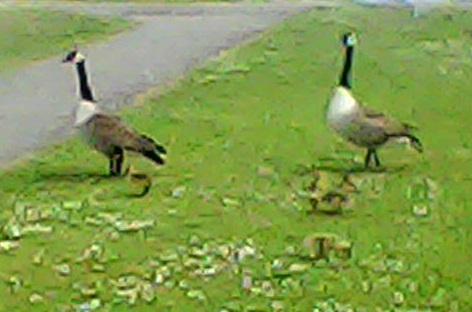 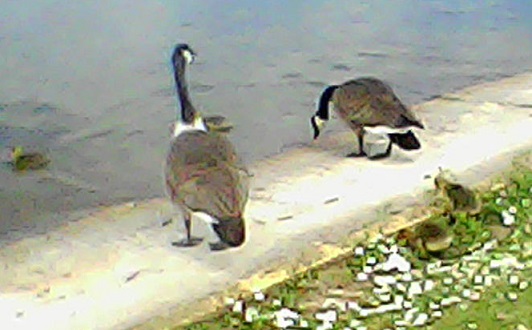 Maggie didn’t bother them and they didn’t bother her either.
It was a little strange though that for all the ducklings we’ve seen recently, there were none on the water today.
Pictures taken in April this year with my Nikon 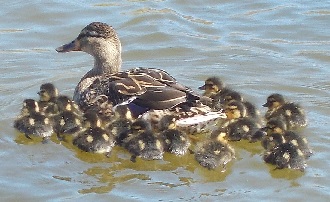 Coming home, we saw the guy who’d had a knee op last year which went horribly wrong walking his dog and a lady up the road on her mobility scooter, her little dog tucked in the footwell. Other than them, no-one else was about now!

I am a retired number cruncher with a vivid imagination and wacky sense of humour which extends to short stories and poetry. I love to cook and am a bit of a dog whisperer as I get on better with them than people sometimes! We have an elderly dog called Maggie who adopted us as a 7 week old pup in March 2005. From 2014 to 2017 'Home' was a 41 foot narrow boat where we made strong friendships both on and off the water. We were close to nature enjoying swan and duck families for neighbours, and it was a fascinating chapter in our lives. We now reside in a small bungalow on the Lincolnshire coast where we have forged new friendships and interests.
View all posts by pensitivity101 →
This entry was posted in Dogs, ducks, observations, walks and tagged dogs, ducks and geese, Park, walk. Bookmark the permalink.