Today’s His and Hers

Hubby asked me to bake a cake today, one without sugar or jam, so that he could have some.
I pointed out that my sponges have sugar in them as a matter of course, but I could do a separate one for him that wasn’t full of jammy goodyness. He was all for it.

I used 4 eggs today which weighed just under 9oz.
I reduced my fat and sugar by 2 oz each and increased my SR flour by 2 oz.
I added 1 level teaspoon of baking powder and cream of tartar, plus two tablespoons of just off the boil water.
Note: For just a sponge cake, I normally use three eggs, and reduce the weight of fat and sugar by an ounce in comparison and increase the flour by an ounce, using half a teaspoon of baking powder and cream of tartar, but again two tablespoons of off the boil water.

Beat sugar and fat together, add one egg at a time plus a tablespoon of flour mix to stop it curdling, then gradually fold in the remainder of the flour with a metal spoon (don’t know why they say that, but it works). Add the water last.
Divide into pans (in my case 2 x 7 inch sponge tins and a one pound loaf tin) then cook in the oven at 180º C for 20 minutes (maybe a little longer depending on what kind of oven you have, mine is a fan oven but 180 in a standard oven would be OK rather than the 200 shown below).

Handy little guide to take out the guesswork.

I’ve frozen one of the sandwich cakes and cut the other in half to make a victoria sponge as normal with jam. Hubby’s is plain, though he could add jam if he wanted to, but the idea is to cut down on his sugar intake and all things sweet in order to help his digestive system. It seems to be working.
Here’s today’s efforts, and they were every bit as light and fluffy as the picture suggests. 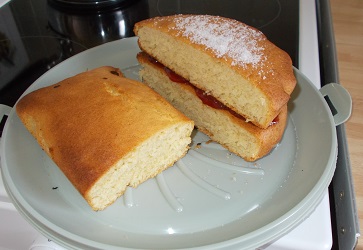 I am a retired number cruncher with a vivid imagination and wacky sense of humour which extends to short stories and poetry. I love to cook and am a bit of a dog whisperer as I get on better with them than people sometimes! We have recently lost our beloved dog Maggie who adopted us as a 7 week old pup in March 2005. We decided to have a photo put on canvas as we had for her predecessor Barney, and now have three pictures of our fur babies on the wall as we found a snapshot of my GSD so had hers done too. From 2014 to 2017 'Home' was a 41 foot narrow boat where we made strong friendships both on and off the water. We were close to nature enjoying swan and duck families for neighbours, and it was a fascinating chapter in our lives. We now reside in a small bungalow on the Lincolnshire coast where we have forged new friendships and interests.
View all posts by pensitivity101 →
This entry was posted in current events, food, My life, recipes and tagged cakes, recipe. Bookmark the permalink.

16 Responses to Today’s His and Hers