Hubby had great plans for today, and we all know what that means………………… 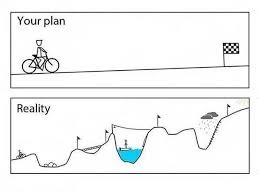 Naturally it didn’t help when I threw back the curtains to see it was snowing.
Things always look better after breakfast though, and by 10 o’clock the snow had turned to sleet, then rain, and at quarter past the sun came out, so I took Maggie for her first walk.
Hurrah! the business is normal and things are looking good, but we’ve had a quiet day spent putting the greenhouse framework together. Naturally Maggie wanted to help.

Pictures taken with my phone

Hubby had a bit of a panic when he thought he’d lost two uprights but this was because we were erecting it the opposite way round to disassembly, and so the back was the front and vice versa. Not a problem and the removal of an upright on one side provided the ‘missing’ upright on the other.

It took us just under two hours so by midday I was in the kitchen preparing lunch. Lasagna today as I haven’t made one for a while.
This is how it looked when I went inside. 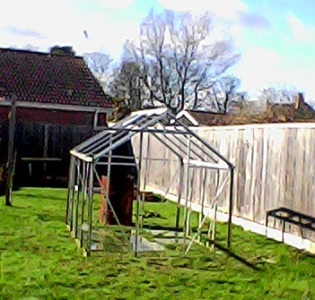 This is not where we wanted it to finally be, so the next part of the plan was to put the base together in situ, square it up, and then lift the frame down the garden to put on top of it. I have therefore exercised muscles I’d forgotten I had as Superman and his sidekick the Bionic Woman carried said frame ‘south’.

Our garden is not flat (there’s a surprise). Neither is it square, plus it has a camber to the right, so armed with a tape measure and spirit level, the pair of us have been tap dancing and balancing on base beams like an audition for A Chorus Line meets the Olympics.
Having done that, we went down to the hardware suppliers and got our two panes of replacement glass plus two ground spikes to peg down the most exposed corners.  This was at the ‘exorbitant price’ of £8.59 for the lot (including VAT).

This is where we are at now (picture taken 4pm this afternoon with my phone) .

All being well the weather will stay dry tomorrow and we can get the glass in.
The onions sets should be going in soon and this year our tomatoes and green beans will have a fighting chance!

I am a retired number cruncher with a vivid imagination and wacky sense of humour which extends to short stories and poetry. I love to cook and am a bit of a dog whisperer as I get on better with them than people sometimes! We have recently lost our beloved dog Maggie who adopted us as a 7 week old pup in March 2005. We decided to have a photo put on canvas as we had for her predecessor Barney, and now have three pictures of our fur babies on the wall as we found a snapshot of my GSD so had hers done too. From 2014 to 2017 'Home' was a 41 foot narrow boat where we made strong friendships both on and off the water. We were close to nature enjoying swan and duck families for neighbours, and it was a fascinating chapter in our lives. We now reside in a small bungalow on the Lincolnshire coast where we have forged new friendships and interests.
View all posts by pensitivity101 →
This entry was posted in Challenge, current events, diary, home and tagged greenhouse, home and garden. Bookmark the permalink.

20 Responses to The Greenhouse : part 2