I haven’t been doing these every day, but Barbara from teleportingweena
has given us the prompt TELEVISION and , hehe, we haven’t got one! 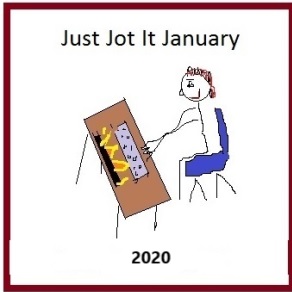 When we sold our bungalow in 2007, we put our stuff into storage, including our 15 year old TV set.
Eventually we bought the cottage, and Hubby (a qualified TV engineer) removed the tuner/receiver so that we could use it to watch our DVDs and videos.
When we bought the boat seven years later, the TV was on its last legs so we dumped it and never replaced it.

It’s a novelty for about an hour to watch TV when we visit anyone, then the same old adverts are run over the same old programmes. When we stayed with MSM, we had over a hundred channels to choose from, but it was just background as there was very little of interest. I confess we did enjoy watching the darts and snooker though.

TV still doesn’t hold much appeal to us. We were never into soaps, reality TV, talent shows or celebrity dance or bake offs, and the majority of films new to the small screen then were usually already in our personal collection. It was a waste of money on a budget already stretched, and I have to say we don’t miss it.

If ever we had visitors, the TV was always turned off as we believed it rude to watch something and preferred to have a conversation.
My MIL lived for her TV. Heaven help anyone who phoned, rang her doorbell or interrupted her soaps for whatever reason. On more than one occasion she got several people in a tizz for not answering her door.
One year we had the Mums over for Christmas dinner, and MIL got quite shirty because we refused to put the television on to let her watch her soaps, even though they were the omnibus editions of episodes she’d already seen. She got hostile and angry, demanding to go home, so Hubby got her coat and took her. My Mum was surprised at her behaviour, then settled down with her cup of tea and had a half hour snooze.

I realise that for many, especially those who live alone, the TV can play an important part in their lives to keep them up to date with current events. However, for us it’s still a definite No No, and even if we’d wanted one when we reached 75, the BBC and our caring (choke) government have moved the goal posts for free TV licences, and surprise surprise, we wouldn’t qualify anyway.

I am a retired number cruncher with a vivid imagination and wacky sense of humour which extends to short stories and poetry. I love to cook and am a bit of a dog whisperer as I get on better with them than people sometimes! We have recently lost our beloved dog Maggie who adopted us as a 7 week old pup in March 2005. We decided to have a photo put on canvas as we had for her predecessor Barney, and now have three pictures of our fur babies on the wall as we found a snapshot of my GSD so had hers done too. From 2014 to 2017 'Home' was a 41 foot narrow boat where we made strong friendships both on and off the water. We were close to nature enjoying swan and duck families for neighbours, and it was a fascinating chapter in our lives. We now reside in a small bungalow on the Lincolnshire coast where we have forged new friendships and interests.
View all posts by pensitivity101 →
This entry was posted in blogging and tagged #JusJoJan. Bookmark the permalink.