More about the Real Me

Over to Rory for the game questions and rules of
What is or who is The Really You? No, really, as in really you? Who are you really? That’s basically what this game is about – who are you – who is – the really you!

Are you ageing gracefully?
Depends who’s looking or asking I guess. I’ve been told I don’t look my age
(will be 64 in May) and don’t always act it either.
I don’t use soap on my face or have any ‘beauty routine’,  use basic shampoo and shower gel, my hair is long and still it’s natural colour peppered with gray, eat as well as our budget will allow and walk the dog at least four times a day. 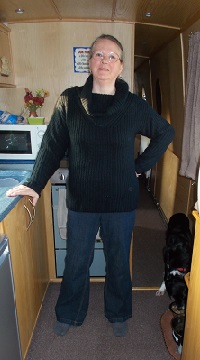 When younger than you are now, did you ever wish yourself older and did you wonder how well you might be faring?
When I was 16, I realised at the turn of the century/millennium I would be approaching my 44th birthday and didn’t think that was too old. That’s now 20 years behind me and I wonder where those 20 years have actually gone. A lot has happened anyway and I certainly never envisioned having breast cancer (twice)

Halve your current age today and thinking back to that younger half age if you were to write a note you other older half of life  as a heads up, what would you say?
I’d be 31½,  so wouldn’t have met Hubby yet. I ‘d tell myself to jump at the opportunities we’d have when we did, and not buy that first house!

I am a retired number cruncher with a vivid imagination and wacky sense of humour which extends to short stories and poetry. I love to cook and am a bit of a dog whisperer as I get on better with them than people sometimes! We have recently lost our beloved dog Maggie who adopted us as a 7 week old pup in March 2005. We decided to have a photo put on canvas as we had for her predecessor Barney, and now have three pictures of our fur babies on the wall as we found a snapshot of my GSD so had hers done too. From 2014 to 2017 'Home' was a 41 foot narrow boat where we made strong friendships both on and off the water. We were close to nature enjoying swan and duck families for neighbours, and it was a fascinating chapter in our lives. We now reside in a small bungalow on the Lincolnshire coast where we have forged new friendships and interests.
View all posts by pensitivity101 →
This entry was posted in blogging, Challenge, questions and answers and tagged Q&A, The Really You. Bookmark the permalink.

11 Responses to More about the Real Me