Many thanks to Carol J Forrester for setting this photoprompt challenge on a monthly basis. More details can be found here: 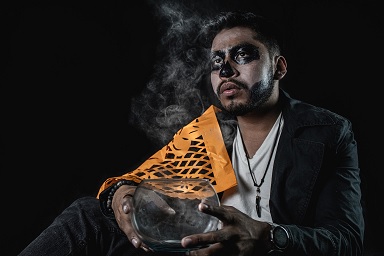 The old man had given him a package wrapped in brown paper.
He’d said it was all he had but he was welcome to it if he’d just spare his life.
Kurt was desperate but no killer and so took the offered parcel with greedy fingers from trembling hands.
‘Go,’ he told the old timer.
‘Thank you………’ and he stumbled away.
Kurt turned down a quiet alley and sat on a pile of empty cartons.
The bundle was heavy, and removing the paper, he was presented with an empty glass jar.
He laughed mirthlessly into the shadows. The rascal had tricked him.
Then a funny thing happened.

Kurt’s hands began to warm, and he realised the heat was radiating from the glass he was holding.
The warmth spread through his body and he no longer felt the desperation he had only a few hours previously.
A mist seeped out from the glass, though there was no opening for it to do so.
It transformed before his eyes into a canine face, a face that seemed to smile at him before drifting towards his head, and nestling behind his eyes.
The glass fell from his hands and shattered on the concrete at the same time he took an expansive breath.
Confined by his clothes, he stripped himself of all things human, leaving behind the shackles and emptiness of his despair.
He had been born again as a different entity and bounded off into the night…….  Free.

The glass gathered itself and remolded. Gnarled hands picked it up and wrapped it in brown paper. He was the giver of life and a saviour of souls, though his ways may seem a little unorthodox.

I am a retired number cruncher with a vivid imagination and wacky sense of humour which extends to short stories and poetry. I love to cook and am a bit of a dog whisperer as I get on better with them than people sometimes! We have an elderly dog called Maggie who adopted us as a 7 week old pup in March 2005. From 2014 to 2017 'Home' was a 41 foot narrow boat where we made strong friendships both on and off the water. We were close to nature enjoying swan and duck families for neighbours, and it was a fascinating chapter in our lives. We now reside in a small bungalow on the Lincolnshire coast where we have forged new friendships and interests.
View all posts by pensitivity101 →
This entry was posted in #flash fiction, blogging, photoprompt and tagged creative writing, speculative fiction prompt. Bookmark the permalink.