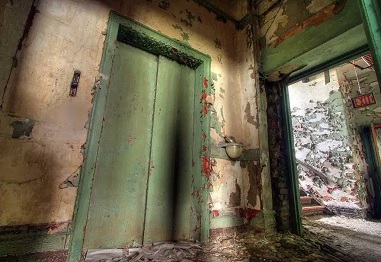 The challenge:
Below, Dylan gives us the first line, and we get to write the rest.
Length, genre, and structure are completely up to us and we can modify the line as we see fit, adding punctuation, quotes, or other bits if so desired. No need to tie it to the picture, unless you want to.
Or for more of a challenge, change nothing.

Include the first line of course!
Tag it Mindlovemisery’s Menagerie, First Line Fridays, and short fiction. Create a link (ping-back) to Dylan’s post above and add your link to Mister Linky.

Our line for this week is:

The elevator stopped on the thirteenth floor with a lurch.
Some things never change.
Vince stepped out onto a floor strewn with debris, dirt and god knew what else.
It was exactly as he remembered it, and the building should have been condemned then.
How could anyone live here, he thought, then reminded himself that he had and got out fifteen years ago.

He crunched across the landing and turned into the corridor.
The stench of piss and last week’s cabbage assaulted his nostrils making him gag.
Damaged thresholds, graffiti, flickering lights and abandoned kids bikes greeted him as he passed.
The door to number 110 had had a new coat of paint since he left. It was flaking now, the wood beneath blistered and split.
He knocked.

Shuffling noises came from within and the door open a crack to reveal a bespectacled eye blinking beneath a severe top bun of pure white hair.
‘Whatcha’want?’ she demanded.
‘Hi Ma. I’ve come to take you home.’
‘This is my home! Go away. I ain’t goin’ nowhere with nobody!’
‘Ma. You have to come. They’re finally going to knock the place down, but can’t while you’re in it. You’re the only one left. Come on. There’s a lovely new apartment across the block waiting for you.’
‘NO! Go away!! You ain’t got no right, so leave me alone!’
and she slammed the door in his face.

Shoulders slumped, Vince retraced his steps. He knew she wouldn’t listen to him, had never forgiven him for leaving all those years ago, but he’d had to try. It was out of his hands now and she would be removed by force.
The elevator was still stopped on the thirteenth floor and he got back inside.

I am a retired number cruncher with a vivid imagination and wacky sense of humour which extends to short stories and poetry. I love to cook and am a bit of a dog whisperer as I get on better with them than people sometimes! We have recently lost our beloved dog Maggie who adopted us as a 7 week old pup in March 2005. We decided to have a photo put on canvas as we had for her predecessor Barney, and now have three pictures of our fur babies on the wall as we found a snapshot of my GSD so had hers done too. From 2014 to 2017 'Home' was a 41 foot narrow boat where we made strong friendships both on and off the water. We were close to nature enjoying swan and duck families for neighbours, and it was a fascinating chapter in our lives. We now reside in a small bungalow on the Lincolnshire coast where we have forged new friendships and interests.
View all posts by pensitivity101 →
This entry was posted in #flash fiction, blogging, Challenge, photoprompt and tagged First Line Fridays, Mindlovemisery’s Menagerie, short fiction.. Bookmark the permalink.