Well, that was the month of August done and dusted, so we are now officially two thirds through the year.
It is a lovely day, sunny but not too hot, so bearable for the three of us.
After breakfast, we took the dog for a leisurely walk up along the prom.
It wasn’t quite 9am, but there were several people about, one or two even having a dip!
Made me feel chilled just looking at them.
Not wanting to overtax Maggie’s joints by walking on the uneven sand, we stuck to the prom and she was quite content sniffing everything within reach, squatting and scent marking to let visiting dogs know who was boss.

The tide was going out but had only just cleared the top ledge of sand. I took this picture with my phone a couple of weeks ago. I like it when it’s like this: 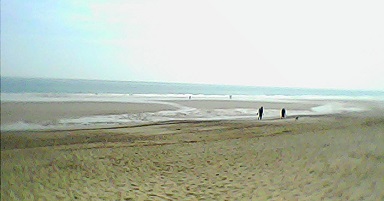 We stopped to chat with a lady we met a little while ago carrying a tiny grey puffball chihuahua. It was a rescue which she’d only had for a few months and she was trying to acquaint it with traffic. Today the dog was content to be walking along the prom showing a little bit of interest in other dogs and people (I got a sniff) and the traffic issue is better, but not yet overcome. This lady was in no hurry to rush her though.
As we were talking, we learned that her husband had died 10 years ago and she had wondered what to do with a massive greenhouse at the bottom of her garden.
She decided to use her woodwork and carpentry skills (as taught to her by her late husband) to convert it and opened a rescue centre for small pets such as guinea pigs and rabbits, and has now progressed to a couple of cats.
We had to laugh when she said she had discovered that she could run (she’s 67 apparently and doesn’t look it) as one of her little dogs got out and she had to chase after it!

As we parted company, we heard a commotion behind us which did not sound friendly. Luckily it did not involve this lady or her dogs but sounded like larger dogs further up by the cafe which wasn’t open yet.  Maybe they were protesting at the delay in a sausage.
We walked a little further then decided not to push our luck and turned back to walk along the grassy bank where we met up with another lady we know who walks her GSD at least 4 times a day.

In her 80s, she’s a spry old dear, with a wicked sense of humour, and salt of the earth. Her dog is getting on now, but protects her from people by standing between them. After a year, she cottoned on that we weren’t a threat and now allows us to fuss her, but only on her terms.

Maggie decided she wanted to check out some particular blades of grass in the park, and coming out we met up with the neighbour Hubby plays pool with sometimes. He has a whippet called Max and our two dogs get on very well together, which is great if we go up to the pub when we’re playing at home where dogs are welcome.

We finally got in just after 10 and settled down for a much needed cuppa! Maggie has flopped on her bed and will sleep for a couple of hours now.

She was moving better again today, so we are just taking things slowly, letting her set the pace and distance.

I am a retired number cruncher with a vivid imagination and wacky sense of humour which extends to short stories and poetry. I love to cook and am a bit of a dog whisperer as I get on better with them than people sometimes! We have an elderly dog called Maggie who adopted us as a 7 week old pup in March 2005. From 2014 to 2017 'Home' was a 41 foot narrow boat where we made strong friendships both on and off the water. We were close to nature enjoying swan and duck families for neighbours, and it was a fascinating chapter in our lives. We now reside in a small bungalow on the Lincolnshire coast where we have forged new friendships and interests.
View all posts by pensitivity101 →
This entry was posted in diary, Dogs, people, walks and tagged beach, dogs, people, walk. Bookmark the permalink.