Frank’s theme this week is City and I thought Oops, I don’t have any pictures of the city, so I might have to pass this week.
Then I thought…………………………..

I have never actually lived in a city, though have visited several and confess I didn’t like the hustle, bustle, traffic and crowds much.
Poole is my home town, and although not a city, when I worked in the town centre, it was pretty busy! Come holiday time or rush hour, it could take as long as an hour to get home!
We lived 2 miles away and on a nice day I could walk into work along the harbour road.
Poole Harbour is the largest natural harbour in Europe, though to me it should now have the accolade of being the largest natural harbour in the world since Sydney Australia added to theirs by default sotospeak.

Poole is also home to Sunseeker, and the sight of those yachts on the quay (yep, these are all my pictures) is quite awesome. Our 41 foot narrow boat would have fitted three or four times into one of these smaller gin palaces. 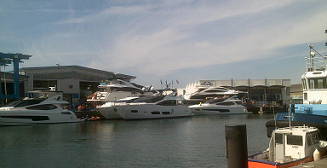 When we moved away in 2007, the second lifting bridge was still in the planning stages.
We were therefore quite excited at seeing it when we visited my Mum on Sept 4th 2016.
What we saw in reality was not what we had envisaged. 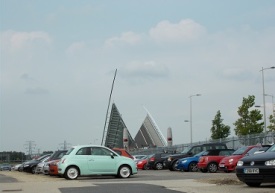 My shots were taken alongside a car park with the Twin Sails up then being lowered after the yachts had passed through to the harbour inlet. The road layout had been totally reversed from as it had been when we left, so it was a bit of game trying to get there, let alone on it!
Mum bless her, had no idea where she was, but was happy to being taken out for a ride. This actually turned out to be the last time we took her out as by the end of that month she had been placed in a care home.

I am a retired number cruncher with a vivid imagination and wacky sense of humour which extends to short stories and poetry. I love to cook and am a bit of a dog whisperer as I get on better with them than people sometimes! In November 2020, we lost our beloved Maggie who adopted us as a 7 week old pup in March 2005. We decided to have a photo put on canvas as we had for her predecessor Barney. We now have three pictures of our fur babies on the wall as we found a snapshot of Kizzy, my GSD when Hubby and I first met so had hers done too. On February 24th 2022 we were blessed to find Maya, a 13 week old GSD pup who has made her own place in our hearts. You can follow our training methods, photos and her growth in my blog posts. From 2014 to 2017 'Home' was a 41 foot narrow boat where we made strong friendships both on and off the water. We were close to nature enjoying swan and duck families for neighbours, and it was a fascinating chapter in our lives. We now reside in a small bungalow on the Lincolnshire coast where we have forged new friendships and interests.
View all posts by pensitivity101 →
This entry was posted in © pensitivity101, blogging, Challenge, Photos and tagged fpj-photo-challenge. Bookmark the permalink.