Following on from this post, Hubby and I were up early this morning to get to the supermarket for opening time at 8am.
The car park was half full, or perhaps still half empty, but with three minutes to go, the trolleys with punters attached were two deep at the door.

Armed with a trolley myself and a shopping list, first stop was the bread counter. Mr Big Guy wasn’t there this morning, but the brats from hell were, demanding pastries, buns, croissants and the like for breakfast to their harassed father who’d got the short straw today and didn’t know his cinnamon from his pecan.
I reached across and got a plastic container for Hubby’s iced bun, then made my way to the rolls selecting one for each of us, then marched on. I say march because it was the only way I could make any progress!

The shop soon filled and it was difficult getting down some aisles, but I know the layout and where everything was that I wanted. I was done, dusted and ready to pay within 10 minutes……………………… and still cheerful!
Only 2 checkouts were open plus the self service but as I wanted some cashback, I had to queue. I didn’t mind. There were four people in front of me who didn’t have that large a shop and three behind by the time I was served.
Not too much today, just £27, but most of that was fruit and I’ve stocked up for next month on some dry stuff I prefer from there.
The saga at the bread and bun counter was continuing, though there was a marked decline in the produce available now.
Meeting Hubby at the boot of our car to offload the trolley contents, he told me why.
There is a little tea rooms in one of the side streets that is very popular for its fresh rolls and cakes. Now we know where they get them from.

I know I moan a bit about the holiday visitors stripping the shelves, but it is good for the town, and when we were on holiday, we actually did the same, but not at a supermarket as the nearest would be about 15 miles away from the camp site.
Being in a tent we didn’t have mod cons like a fridge or cooker as they do in campers, but that didn’t stop us having our cooked breakfasts and a proper meal as the mood took us. However, we did find THE place for fresh pasties.

Our breakfasts on holiday could be anything, including ice cream, but at 6am the pasties were just coming out of the oven and the baker was opening for business.
We were nearly always the only ones waiting, and those pasties were divine but so damn hot, the baker triple wrapped them for us to protect our fingers.
Just down the road from him was the market which had a cake stall, and they did the most superb meringues with fresh fruit and cream. They were so big, the carton couldn’t contain them, so naturally we had to eat them there and then, which was of course another breakfast. 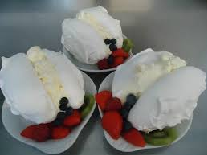 These were the days before 24 hour opening, but we got to know the lay of the land and when places would open, so were able to avoid the rush because rarely does anyone on holiday get up with the lark in order to find breakfast, unless you’re another bird of course! 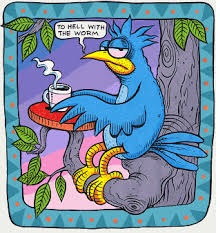 I am a retired number cruncher with a vivid imagination and wacky sense of humour which extends to short stories and poetry. I love to cook and am a bit of a dog whisperer as I get on better with them than people sometimes! In November 2020, we lost our beloved Maggie who adopted us as a 7 week old pup in March 2005. We decided to have a photo put on canvas as we had for her predecessor Barney. We now have three pictures of our fur babies on the wall as we found a snapshot of Kizzy, my GSD when Hubby and I first met so had hers done too. On February 24th 2022 we were blessed to find Maya, a 13 week old GSD pup who has made her own place in our hearts. You can follow our training methods, photos and her growth in my blog posts. From 2014 to 2017 'Home' was a 41 foot narrow boat where we made strong friendships both on and off the water. We were close to nature enjoying swan and duck families for neighbours, and it was a fascinating chapter in our lives. We now reside in a small bungalow on the Lincolnshire coast where we have forged new friendships and interests.
View all posts by pensitivity101 →
This entry was posted in current events, diary, Memories, shopping and tagged food, shopping, supermarket. Bookmark the permalink.