I woke up the other day and felt thin.
This might seem a little weird to many of you, but despite the recent weight loss, I haven’t really noticed a difference in my body shape. My clothes fit OK, a little baggy perhaps, and it did become rather tedious having to hitch up my joggers every time I put something in the pockets and tried to walk anywhere!
The joggers had a cord, but this only just reached round my middle, so I wasn’t exactly skinny and had an indentation passing as a waist so could tie it in a bow.

Hubby has said he can see a difference. A lady up the road who has a springer spaniel also commented, but me? No.
This is quite common as we see ourselves every day and get used to what we see. Obviously there is less of me, but my eyes hadn’t actually cottoned on to that yet.
So, tired of the falling down and hitching up actions, I had noticed that my joggers are a little worn (they are actually over two years old), so I decided to designate them to the rag pile and fish out one of the new pairs we bought last year when we went to Cheltenham for my mammogram.
These are the same size as the ones I have just discarded, but still 2 sizes down from the Extra Large I had been wearing three years previously. 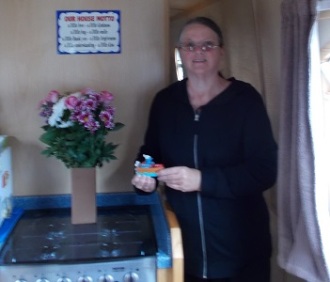 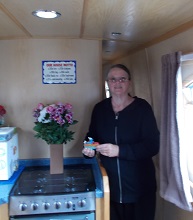 in five months, so my aim was to get back there.

This was me in November 2016 shortly after my lumpectomy, the same weight as I am now and exactly where I wanted to be when I rejoined SW in May this year.
Finally I feel a sense of achievement…………… and ‘thin’.

I am a retired number cruncher with a vivid imagination and wacky sense of humour which extends to short stories and poetry. I love to cook and am a bit of a dog whisperer as I get on better with them than people sometimes! We have recently lost our beloved dog Maggie who adopted us as a 7 week old pup in March 2005. We decided to have a photo put on canvas as we had for her predecessor Barney, and now have three pictures of our fur babies on the wall as we found a snapshot of my GSD so had hers done too. From 2014 to 2017 'Home' was a 41 foot narrow boat where we made strong friendships both on and off the water. We were close to nature enjoying swan and duck families for neighbours, and it was a fascinating chapter in our lives. We now reside in a small bungalow on the Lincolnshire coast where we have forged new friendships and interests.
View all posts by pensitivity101 →
This entry was posted in change, clothes, diary, weight issues and tagged success, weight loss. Bookmark the permalink.