Many thanks to Bikurgurl for setting the 100 WW challenge again this week. 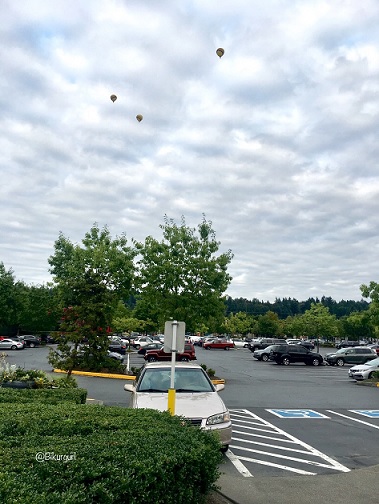 Floating high up in the sky,
Surely the map can’t be right?
Can we be just twenty miles
From home and a Superstore site?
Anyone see a parking space?
We’ll need plenty of room to land,
If we’re lucky some local folk
Might give us a helping hand.
Following on, first one, then two,
The third is the one to lead,
Biggest by far and highest too
He has confidence to succeed.
Coasting down with a smile and aplomb,
Take it easy with plenty of care,
Doing great, until the official comes out:
‘Oi! You can’t park that thing there!’

I am a retired number cruncher with a vivid imagination and wacky sense of humour which extends to short stories and poetry. I love to cook and am a bit of a dog whisperer as I get on better with them than people sometimes! We have an elderly dog called Maggie who adopted us as a 7 week old pup in March 2005. From 2014 to 2017 'Home' was a 41 foot narrow boat where we made strong friendships both on and off the water. We were close to nature enjoying swan and duck families for neighbours, and it was a fascinating chapter in our lives. We now reside in a small bungalow on the Lincolnshire coast where we have forged new friendships and interests.
View all posts by pensitivity101 →
This entry was posted in blogging, Challenge, photoprompt and tagged #100WW, 100 word challenge, 100 word wednesday. Bookmark the permalink.