So now it’s time for this week’s Fandango’s Flash Fiction Challenge. The image below is from Fandango at Fivedotoh.com. 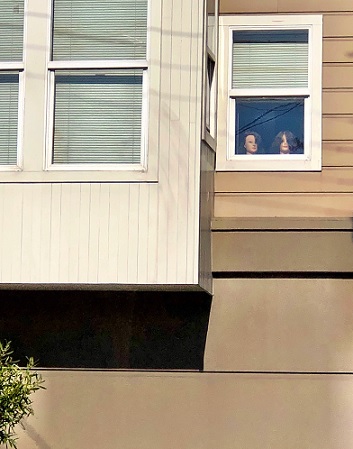 Sandi and Barb looked out of their window.
‘Have you ever wondered what it would be like downstairs?’ Sandi asked.
‘Some. It would be a bit difficult under the circumstances though.’
‘We’ve known each other what, four years?’
‘Something like that, and been friends for at least three. Why?’
‘Just thinking. Times, attitudes and ambitions change.’
‘That’s true. I think it might have something to do with the hair.’
Sandi giggled.
‘She did get a bit carried away didn’t she. At least we only got a trim, not like Stella over there.’
‘I heard that!’
‘Oh come on, you’ve got to admit it could have been worse.’
‘What’s worse than being bald??’ Stella whined.
‘Common enough mistake, she thought your hair would grow back.’ Barb quipped.
‘I’m a doll for chrissake. My hair was long and luxurious and the little ‘darling’ chopped it all off!’
‘She cut ours as well you know.’
‘Sure, but at least you still have some. I’m ashamed to show my face, let alone look out of the window.’
‘Actually Stell, we don’t have a choice.’
‘What’s that supposed to mean?’
‘The little ‘darling’ as you put it has gone beyond wanting to be a hairdresser. Now she wants to be a surgeon. You seen my legs or Barb’s body anywhere?’

I am a retired number cruncher with a vivid imagination and wacky sense of humour which extends to short stories and poetry. I love to cook and am a bit of a dog whisperer as I get on better with them than people sometimes! We have an elderly dog called Maggie who adopted us as a 7 week old pup in March 2005. From 2014 to 2017 'Home' was a 41 foot narrow boat where we made strong friendships both on and off the water. We were close to nature enjoying swan and duck families for neighbours, and it was a fascinating chapter in our lives. We now reside in a small bungalow on the Lincolnshire coast where we have forged new friendships and interests.
View all posts by pensitivity101 →
This entry was posted in #flash fiction, blogging, Challenge, photoprompt and tagged #FFFC, fandango's flash fiction challenge. Bookmark the permalink.