Monday’s wordle this week (although I realise it’s now Wednesday!) 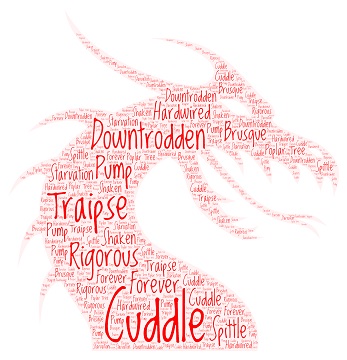 She had traipsed through the streets for what seemed hours and finally sat under a poplar tree, shaken by his rigorous brusque words.
She had only wanted a cuddle, yet he had turned on her and cast her aside like a rag doll. How had she missed that he was hardwired to be so cruel and callous?
Soon anger began to pump through her body. She would not be a downtrodden victim  starved of affection. No sir.
The sight of spittle dripping from his lips would stay with her forever and that was enough to strengthen her resolve. There was a better life for her elsewhere.

I am a retired number cruncher with a vivid imagination and wacky sense of humour which extends to short stories and poetry. I love to cook and am a bit of a dog whisperer as I get on better with them than people sometimes! We have an elderly dog called Maggie who adopted us as a 7 week old pup in March 2005. From 2014 to 2017 'Home' was a 41 foot narrow boat where we made strong friendships both on and off the water. We were close to nature enjoying swan and duck families for neighbours, and it was a fascinating chapter in our lives. We now reside in a small bungalow on the Lincolnshire coast where we have forged new friendships and interests.
View all posts by pensitivity101 →
This entry was posted in blogging, Challenge, word prompt and tagged Mindlovemisery’s Menagerie, wordle #146. Bookmark the permalink.