This week Paula has given us the theme of fair and the following picture from Pixabay. 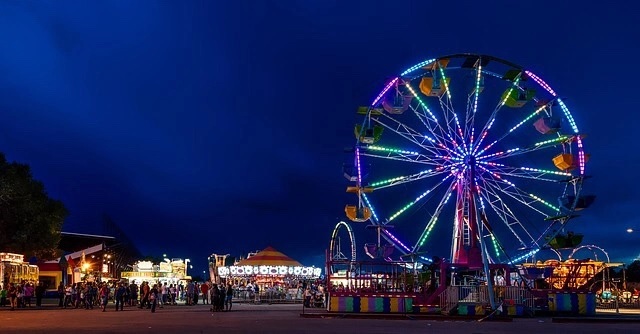 My previous post was about roller coasters and the ferris wheel is another fairground attraction that doesn’t appeal.
I love the fair though, the atmosphere, the booming music of popular songs, and everywhere you look there’s a food stall of some description.
It wasn’t until the 1980s that I felt brave enough to have a go on the dodgems, then I was hooked and had a lot of fun. Not so now as all that bashing, colliding and banging plays havoc with my back!
The noise and smells bring back happy memories of bringing goldfish back in the bloodbank of the old ambulance Dad had that we camped in, candy floss, hot dogs and freshly cooked doughnuts.
When Hubby and I first got together, we got a bear! Rather than write about it again, you can check it out here.

When we were on the boat, the Mop Fair came to town in October and we ventured up with the dog to see what it was all about. Maggie wasn’t too bothered by the noise and managed to keep out of the way of feet, screaming excited kids and pushchairs. We got a bag of chips and a sausage for her then sat on a bench and people watched.
They had a ferris wheel, bungee cords and various other rides, but we didn’t go on any.
The second year it was much bigger and noisier, with inflatable Minions everywhere and inflated prices on sweets and burgers from the weekday markets. I swear the prices were on velcro!
It was only on for two nights, but come Sunday morning, the fair was gone and the streets clear of rubbish as they brought their own clean up crew. But then, that was the whole idea in the first place that if you didn’t have a trade, you brought a mop which guaranteed you work and you cleaned up!

I am a retired number cruncher with a vivid imagination and wacky sense of humour which extends to short stories and poetry. I love to cook and am a bit of a dog whisperer as I get on better with them than people sometimes! We have an elderly dog called Maggie who adopted us as a 7 week old pup in March 2005. From 2014 to 2017 'Home' was a 41 foot narrow boat where we made strong friendships both on and off the water. We were close to nature enjoying swan and duck families for neighbours, and it was a fascinating chapter in our lives. We now reside in a small bungalow on the Lincolnshire coast where we have forged new friendships and interests.
View all posts by pensitivity101 →
This entry was posted in #flash fiction, blogging, Challenge, photoprompt and tagged #lightm0tifs, #p0eticlicense, Thursday Inspiration. Bookmark the permalink.