Every morning when we open the door we are greeted by a friendly sparrow welcoming in the day. He flies away, sometimes across to next door’s fence or up on to our roof, but we believe there may be a nest under one of the edge tiles on our porch.  Not that we mind.
It’s comforting to hear him, and he sings practically all day.
On a few mornings coming back from walking the dog on my own, I have chatted to a crow that sits on our roof sometimes. He doesn’t say anything though and flies off when he’s good and ready.
We also have four pigeons now that visit our garden, chubby walking dinners if needs must, but a pleasing sight nonetheless.

Sitting here going through my reader, I could hear Mr Sparrow in the background then suddenly the song changed key.
I said to Hubby ‘That’s a different chirp’ and got up to investigate.
No pictures other than the internet for now, but we had four or five goldfinches on our fence posts and gate. In a flurry of wings, I think three flew into the garden, leaving two on the gate.

I got the camera, but the screen is up so I would have had to move it to one side, which would have scared them away anyway.
I am so pleased, as the little birds are finally coming into our garden which is a mass of colour thanks to our flower bed and home grown veg which is coming into its own now. We have seen a wren, blue tits, coal tits, our friendly supervising-while-Hubby-dug robin, a family of blackbirds, sparrows, starlings, and this past week a fieldfare, which like the blackbird, is a member of the thrush family. 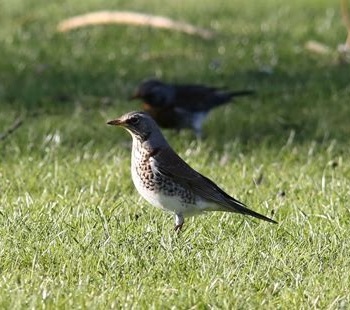 Since the Ratilda episode, we haven’t put our feeder back up yet, but we’d disposed of the seed containers so would have to get some more now.
Wonderful.

I am a retired number cruncher with a vivid imagination and wacky sense of humour which extends to short stories and poetry. I love to cook and am a bit of a dog whisperer as I get on better with them than people sometimes! We have an elderly dog called Maggie who adopted us as a 7 week old pup in March 2005. From 2014 to 2017 'Home' was a 41 foot narrow boat where we made strong friendships both on and off the water. We were close to nature enjoying swan and duck families for neighbours, and it was a fascinating chapter in our lives. We now reside in a small bungalow on the Lincolnshire coast where we have forged new friendships and interests.
View all posts by pensitivity101 →
This entry was posted in current events, diary, nature, observations and tagged birds, garden, observations. Bookmark the permalink.

23 Responses to A different chirp