A lesson in Rice Pudding

Hubby likes cold rice pudding, and in days long past we used to buy two trays (24 cans) for the month as they were something ridiculous like 18p a tin.
Prices like everything else have gone up, and having little storage on the boat, it became something I didn’t buy unless we’d have it that day for dessert.
Now we have cupboard space, I’ve taken to buying three or four cans for him, opting for the low fat variety at 33p a tin.

Doing a top-up shop this week in a different branch of the store, I bought 2 cans, one of which he had today.
The first thing he noticed was it didn’t have a ring pull like the others, and when he opened it, all he could see was liquid.
He put a spoon in and didn’t touch anything solid for a good inch and a half, and that is quite something when you consider the can is only 4 inches high (I’ve just measured it).
Looking at the label, I noticed a banner saying ‘less than 2% fat’, and thought dammit, they’ve changed a perfectly good recipe and keeping costs down by giving you less rice inside.
I had one of the other tins in the cupboard, and compared the Best Before Dates which were both April 2021. 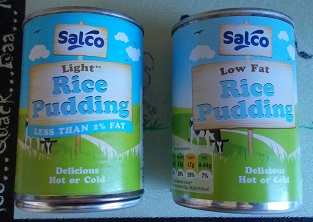 Then I noticed something else: One was ‘Low Fat’, and the other ‘Light’, so different tinned produce, not an upgrade.
Hubby said it was sweeter so I’ve compared labels, which made quite interesting reading. 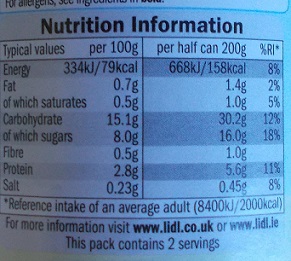 I did a comparison chart (below) as the figures might be a bit difficult to read.

In summary, for the same price and a few less calories, fat and sugar, you can ‘enjoy’ a tin of milk with the occasional portion of rice thrown in.
If you’re wondering how much 28 calories (186 less 158) looks like,  1 gingernut biscuit has 46 calories, 1 dried apricot has about 10 calories, 1 Rivercote garlic cracker has 27 calories, and a 20g SW Fruit and Nut Hi-Fi bar has 73 calories (these are the things I have in my cupboard for comparison).
Makes you think………………………………….

I am a retired number cruncher with a vivid imagination and wacky sense of humour which extends to short stories and poetry. I love to cook and am a bit of a dog whisperer as I get on better with them than people sometimes! We have recently lost our beloved dog Maggie who adopted us as a 7 week old pup in March 2005. We decided to have a photo put on canvas as we had for her predecessor Barney, and now have three pictures of our fur babies on the wall as we found a snapshot of my GSD so had hers done too. From 2014 to 2017 'Home' was a 41 foot narrow boat where we made strong friendships both on and off the water. We were close to nature enjoying swan and duck families for neighbours, and it was a fascinating chapter in our lives. We now reside in a small bungalow on the Lincolnshire coast where we have forged new friendships and interests.
View all posts by pensitivity101 →
This entry was posted in food, Just a thought, observations, Personal Thoughts and tagged comparison, food, healthy eating, rice pudding. Bookmark the permalink.

9 Responses to A lesson in Rice Pudding