Not all that long ago, anything over 50 years of age was considered to be an antique.
Like UK pension entitlements, the goalposts have been changed, and it is now anything over 100 years of age is now entitled to that status.
Taking into account the age of people, anyone over the age of 100 is indeed a wonderful achievement, and similarly anyone who has been in a relationship, be it marriage or something else, for 50 years or more is equally awesome.
Now what has this got to do with ancient you might ask?

Other than feeling ancient at times, and no doubt considered ancient by my nephews and nieces two or three times removed, meet Grandad.

The pilot sitting on his lap is Rembrandt, a Dutch bear purchased in 1993 on our second trip to Amsterdam.
Grandad is my bear. My second actually, as the first was stolen off my pram when I was a couple of weeks old.
Grandad at 63 is therefore as old as I am, but as I have no idea how the multiples of bear years compares to those of dogs and cats, in his own way, I guess he could be considered one of The Ancients of his kind.
He was my constant companion growing up, unfortunately having a bit of an identity crisis when I was very young as I dressed him in a purple net tutu. It was actually an old petticoat, but I loved the colour and when it didn’t fit anymore, I couldn’t bear to part with it (excuse the pun).
He has a segmented face similar to a Steiff bear, the main body and head is stuffed with straw and a hump on his back made him growl when tipped forward. That hasn’t worked for years though.
He had leather paws, but these wore away and were lovingly darned by my Mum years ago. You can see the kapok filling in his feet. 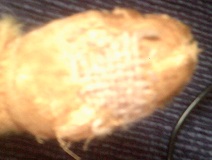 Hubby came to the rescue when we were on the boat and gave him a complete makeover, so Grandad now has a new nose and mittypaws keeping his hands and feet toasty warm. 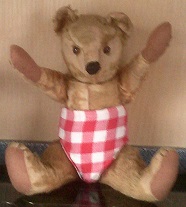 Maybe I should explain about the pants.
These were made by my great grandmother from remnants of material used for frocks for my sister and I. She felt it was more dignified for a bear of his standing to have them than be stark naked after the tutu episode.

I am a retired number cruncher with a vivid imagination and wacky sense of humour which extends to short stories and poetry. I love to cook and am a bit of a dog whisperer as I get on better with them than people sometimes! We have recently lost our beloved dog Maggie who adopted us as a 7 week old pup in March 2005. We decided to have a photo put on canvas as we had for her predecessor Barney, and now have three pictures of our fur babies on the wall as we found a snapshot of my GSD so had hers done too. From 2014 to 2017 'Home' was a 41 foot narrow boat where we made strong friendships both on and off the water. We were close to nature enjoying swan and duck families for neighbours, and it was a fascinating chapter in our lives. We now reside in a small bungalow on the Lincolnshire coast where we have forged new friendships and interests.
View all posts by pensitivity101 →
This entry was posted in blogging, Challenge, humour, Memories, Photos and tagged fpj-photo-challenge, memories. Bookmark the permalink.