For visually challenged writers, Sue’s image shows three figures that seem to be female and made of branches, with their hands joined. 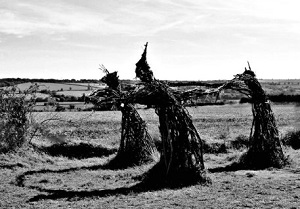 It was no wonder the Wicker sisters started to bicker.
All three were fed up, bored, and at a loose end.
I-spy had long lost its appeal, there were no creatures around with which to pass the time of day and all they had was each other.
The wickering started early in the day, the eldest moaning about not having enough colour in her cheeks, and the middle sister exasperated by the drabness of her attire.
The youngest, despite the discomfort of a branch that had become dislodged in a rather delicate place, was forever the optimist and had an idea.
‘Come sisters! Let us celebrate the day and dance under the clear sky!’
‘Not on your nelly!’ said the eldest. ‘My corns are playing up!’
‘You’re mad! What if someone should see?’ said the second. ‘It’ll be pandemonium in the field and the farmer will do his crust!’
‘So what if they do? Who would believe them and by the time anyone came to check, we’ll be long stagnant in our usual places. Where’s your sense of adventure? The world is more than black and white! Come on! Let’s have some fun!’
‘Oh all right then,’ the two miseries said in unison.
The three joined hands and began to sway side to side gently gathering momentum.
As they did so, the movements brushed their surroundings, defining them and it in Nature’s hues.

‘Well I never!’ said the eldest.

I am a retired number cruncher with a vivid imagination and wacky sense of humour which extends to short stories and poetry. I love to cook and am a bit of a dog whisperer as I get on better with them than people sometimes! We have recently lost our beloved dog Maggie who adopted us as a 7 week old pup in March 2005. We decided to have a photo put on canvas as we had for her predecessor Barney, and now have three pictures of our fur babies on the wall as we found a snapshot of my GSD so had hers done too. From 2014 to 2017 'Home' was a 41 foot narrow boat where we made strong friendships both on and off the water. We were close to nature enjoying swan and duck families for neighbours, and it was a fascinating chapter in our lives. We now reside in a small bungalow on the Lincolnshire coast where we have forged new friendships and interests.
View all posts by pensitivity101 →
This entry was posted in blogging, Challenge, photoprompt and tagged #write photo, Thursday photo prompt. Bookmark the permalink.