Join us on our walk today

After torrential rain all night and Hubby’s garlic doing the breaststroke in the pots outside (probably ruined actually as they don’t like to be over watered), we were up later than usual.
Maggie wasn’t too impressed on getting soaked for her morning wee, even if it was gone 9am, but around 10.30, the sun was shining and there wasn’t a cloud in the sky.

Although we’ve walked Maggie every day, it’s been a few since we all went to the park.

Photo: October 2017 shortly after our arrival.

We have a welcoming committee of two mallards who see us and immediately get out of the water to come waddling. Today was no exception, so I threw two handfuls of seed on the grass and left them tucking in.

Last time I came, there were ducklings everywhere, but today it was very quiet in that department, and we were a little worried. The herring gull had been present and bullying the little ones last time, and we have since heard that a sparrowhawk has also been plucking off the babies as they swam on the lake.

With all the rain, a lot of the muck has been washed away and the goose deposits on the pathways were fresh. One path by the bridge is flooded so we had to walk round on the grass, and bird poo got well and truly wedged in the treads of my trainers.
We stopped actually on the bridge and dropped the seed below to a group of ducks who were soon joined by a Momma and her babies.
We counted 11, and aren’t sure if this is a reduced brood or a new one. 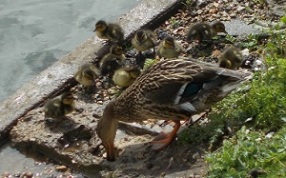 They are just so tiny but were curious enough to come out of the water and test the seed we’d dropped.

Over the bridge, we saw a small number of adult Canada geese, and another reason for going this morning. Hubby had been a couple of times recently and taken pictures on his phone of the first batch of goslings.
The adults didn’t let me get too close, though that may well come later as it did last year, but I managed to get these: 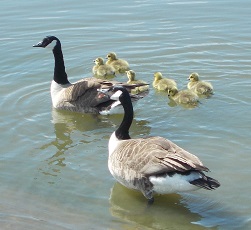 No sign of any others yet, but there are still a lot of geese on nests on the island.

Maggie decided she wanted to walk up to the sea front, which was horrendously busy!
The tide was in and the waves attacking the shore, the water muddy with swirling sand from the pressure within. It was a day of ‘little dogs’ today, all busy sniffing and peeing, so maybe they haven’t been getting out much!
On the way back through the park to share the last of our seed, we noticed another brood of ducklings and counted 13, but they were too far away to take a picture.

The sun is still shining, and Hubby is outside working on his latest project.
I shall be getting our lunch shortly, nothing too fancy, jacket spuds, tuna and veg.

I am a retired number cruncher with a vivid imagination and wacky sense of humour which extends to short stories and poetry. I love to cook and am a bit of a dog whisperer as I get on better with them than people sometimes! We have recently lost our beloved dog Maggie who adopted us as a 7 week old pup in March 2005. We decided to have a photo put on canvas as we had for her predecessor Barney, and now have three pictures of our fur babies on the wall as we found a snapshot of my GSD so had hers done too. From 2014 to 2017 'Home' was a 41 foot narrow boat where we made strong friendships both on and off the water. We were close to nature enjoying swan and duck families for neighbours, and it was a fascinating chapter in our lives. We now reside in a small bungalow on the Lincolnshire coast where we have forged new friendships and interests.
View all posts by pensitivity101 →
This entry was posted in current events, diary, ducks, nature, observations, Walk Thoughts and tagged ducklings, goslings, walks. Bookmark the permalink.

15 Responses to Join us on our walk today