We have been wondering if Maggie’s ‘disobedience’ off lead is due to familiarity, that is she knows where she is, so doesn’t need us!
Today, it has been so gloriously sunny, even if still a bit on the chilly side, we decided to have a field trip.
To be honest, with little money spare after her vet bill this week, we are restricted as far as distance is concerned, so as somewhere like Boston and the plantation round trip is over 70 miles, that wasn’t really practical.
However, Hubby needed some new undies, and we have found a shop in Skeg that stocks them at a reasonable price, though I can assure you they are not purple as that is so not his colour!

Anyway, there is a place on the coast road where we stop every trip to give Maggie a potty break, but we have never actually explored the pathways. So today we did.
It was really pleasant as we had bulrushes and marsh on one side and a lake with hawthorn and other saplings on the other. The water on the bulrush side was covered in green algae, but at least Maggie made no attempt to go swimming.
I spotted a couple of blue tits in the hawthorn, and Hubby saw a tiny wren. Maybe we should try and get a hawthorn variety for the garden, after all, that’s what the council gave us in Poole.
We saw a couple of greylag geese fly overhead, and there was one white waterfowl flying with them which we couldn’t identify but know it wasn’t a swan, so could have been a white goose perhaps or even an egret.
Note: This particular road is popular with Twitchers as there are marsh harrier breeding grounds here, so different types of waterfowl would not be unusual.

Maggie didn’t stray far, though she was in her sniffathon element as it was all new to her.
As we rounded a corner, we were confronted by an alligator.
Well, actually it was a wood carving of a large newt or lizard, and Hubby used his phone to take pictures of me with my new pet .

Next time we go, I’ll take my little Nikon camera as this is quite lovely and realistic.
Maggie wasn’t that impressed though and trotted off to sniff the banks, which was probably more interesting for her anyway, but again she made no effort to go in the water.
We also saw the build up of reeds on the inner side of the lake, and believe they could well be nests for the geese as they resembled the ones made by the swans on the marina. 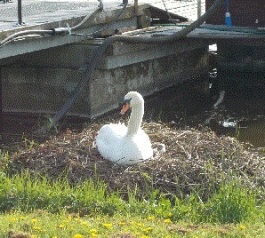 They are high above the water level and so well protected from any possibility of flooding, so although no birds were sitting on them, two greylags were on the water in close proximity of one.
I think we shall be walking this way often in the near future and hopefully I can get some shots of greylag goslings as well as the Canada geese here in the park. 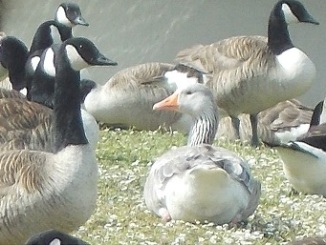 Photos: Our grey lag geese in the park taken last year. They are not a pair as each seem to have paired up with a Canada goose, but we saw no cross-breed young (yet) unless it was this guy who was the only one of his kind in the flock.

I am a retired number cruncher with a vivid imagination and wacky sense of humour which extends to short stories and poetry. I love to cook and am a bit of a dog whisperer as I get on better with them than people sometimes! We have recently lost our beloved dog Maggie who adopted us as a 7 week old pup in March 2005. We decided to have a photo put on canvas as we had for her predecessor Barney, and now have three pictures of our fur babies on the wall as we found a snapshot of my GSD so had hers done too. From 2014 to 2017 'Home' was a 41 foot narrow boat where we made strong friendships both on and off the water. We were close to nature enjoying swan and duck families for neighbours, and it was a fascinating chapter in our lives. We now reside in a small bungalow on the Lincolnshire coast where we have forged new friendships and interests.
View all posts by pensitivity101 →
This entry was posted in current events, diary, Maggie, nature, observations, Photos, swans, walks and tagged geese, lake, nature, observations, swans, walk. Bookmark the permalink.