When Hubby had a stab at being self-employed, if he did a little job for my friends at the bank, apart from reimbursement for any spares, he didn’t charge them for fixing anything, cheerfully suggesting they could pay him in CAKE! Marmalade cake was his favourite.

It wasn’t that I didn’t or couldn’t make cake, just that I didn’t do so very often for just the two of us, so it was very much a case of my Dad’s joke about pending visitors if I started baking!

I’m cheating with a previous photo of the cheesecake I made when my SIL came to stay: 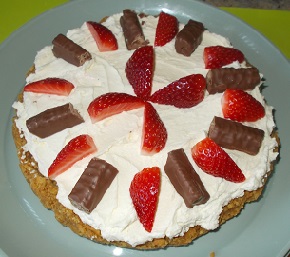 She had a generous slice, but I had to ‘force’ myself to eat the rest over the next few days as Hubby couldn’t tolerate it. He did try a small piece, but the reflux hit him within minutes, so we believed it was the richness of the cream that ‘dun him in’,

However, for a victoria sponge, he has no such problems and I manage to make it last at least 5 days. 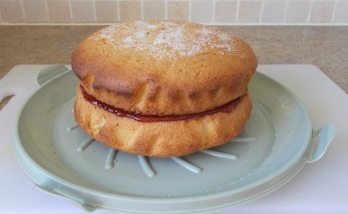 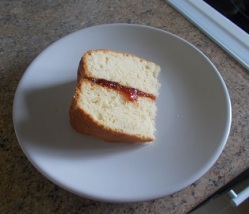 I weigh everything pro rata to the weight of the eggs.
Three eggs equate to around 7 oz.
so in addition I use
6oz fat (butter or margarine)
6oz sugar
8oz SR flour
½ teaspoon cream of tartar
½ teaspoon baking powder
Plus 2 tablespoons of boiled water in the final beating.

I am a retired number cruncher with a vivid imagination and wacky sense of humour which extends to short stories and poetry. I love to cook and am a bit of a dog whisperer as I get on better with them than people sometimes! We have recently lost our beloved dog Maggie who adopted us as a 7 week old pup in March 2005. We decided to have a photo put on canvas as we had for her predecessor Barney, and now have three pictures of our fur babies on the wall as we found a snapshot of my GSD so had hers done too. From 2014 to 2017 'Home' was a 41 foot narrow boat where we made strong friendships both on and off the water. We were close to nature enjoying swan and duck families for neighbours, and it was a fascinating chapter in our lives. We now reside in a small bungalow on the Lincolnshire coast where we have forged new friendships and interests.
View all posts by pensitivity101 →
This entry was posted in blogging, Challenge, Photos, recipes and tagged cake, fpj-photo-challenge. Bookmark the permalink.