Ist match of the Summer

We now have seven men and 6 women in the Summer team, so we won’t all play in the doubles or gallon. It wasn’t the most organised of evenings, but we held our other pub team to a 7 all draw.
Sadly I lost my doubles game, though did get the winning double in one leg.
Hubby and I have been playing at home and I’ve changed my game a little, trying to concentrate more on the top of the board the way I used to when I played in the ’80s.
Still no scores over 100 to get on the back of the sheet, but I didn’t do too badly with a few in the 70s and 80s and a couple in the 90s, my best being 97.
The ladies lost in the 701 gallon too, so it was all up to the guys for their 1001 down.
I was chalking, and it was one of the fastest games I’ve known. There were a lot of high scores, but our lads played really well and were 200 ahead at one stage.

We’re away next week, but it’s still local so I won’t have to drive.
Meanwhile, I’ll keep pounding away at those 20s. 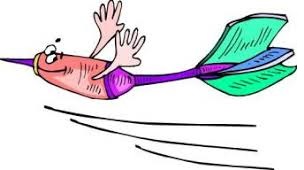 I am a retired number cruncher with a vivid imagination and wacky sense of humour which extends to short stories and poetry. I love to cook and am a bit of a dog whisperer as I get on better with them than people sometimes! We have an elderly dog called Maggie who adopted us as a 7 week old pup in March 2005. From 2014 to 2017 'Home' was a 41 foot narrow boat where we made strong friendships both on and off the water. We were close to nature enjoying swan and duck families for neighbours, and it was a fascinating chapter in our lives. We now reside in a small bungalow on the Lincolnshire coast where we have forged new friendships and interests.
View all posts by pensitivity101 →
This entry was posted in current events, diary, games and tagged darts. Bookmark the permalink.

2 Responses to Ist match of the Summer