For visually challenged writers, the image shows the view from within a cave on the sea shore, looking out onto a beach. There are the shadowy entrances of other caves across the bay and a waterfall tumbles down from the rocky cliffs. 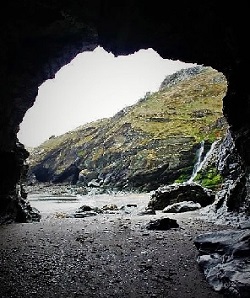 For details and how to join in Sue’s weekly challenge, click here

It was a good hiding place.
No-one would find him here, and safe in the darkness, he settled down to sleep.

When he awoke, the landscape had changed and he saw other doorways into tunnels that had been hidden by the tide.
His own cavern was no longer footed by water, and he tentatively put his feet down from his rocky bed onto the gritted floor fully expecting to sink up to his waist.
On wobbly legs he walked out into daylight, marvelling at the freshness of the air, the warmth of the sun and crisp clean colours of the shoreline.
It was also remarkably quiet, no argumentative gulls fighting over scraps, the only sound being the gentle trickle of the waterfall.
He rinsed his face, then cupped his hands under the cool water, raising them to his lips.
He felt revived, curious, blessed and terrified.
He had wished for one day above water.
Come dusk, he must return to this threshold, embrace the evening tide and revert to his aquatic form.

I am a retired number cruncher with a vivid imagination and wacky sense of humour which extends to short stories and poetry. I love to cook and am a bit of a dog whisperer as I get on better with them than people sometimes! We have an elderly dog called Maggie who adopted us as a 7 week old pup in March 2005. From 2014 to 2017 'Home' was a 41 foot narrow boat where we made strong friendships both on and off the water. We were close to nature enjoying swan and duck families for neighbours, and it was a fascinating chapter in our lives. We now reside in a small bungalow on the Lincolnshire coast where we have forged new friendships and interests.
View all posts by pensitivity101 →
This entry was posted in blogging, Challenge, photoprompt and tagged #write photo, photoprompt. Bookmark the permalink.