I have always appreciated the wonder of Nature, be it from the new growth in the garden after heavy frosts during the winter months to the mating season of the birds and water fowl in the park.
We take so much for granted, and I remember so many ducklings fall victim to pike, herons and gulls on the marina. It was a wonder if a clutch of some 12 babies had any survivors.
One Mother Duck had just one baby left out of an original brood of 9.
She guarded that baby literally with her life. If there was a predator on the prowl, she shielded it with her tail feathers, or guided it to safety and cover in the reeds adjoining the bank.
We watched that baby grow, how other female mallards became Aunts and also kept a vigilant watch.
Mother Duck would bring her offspring alongside our boat, 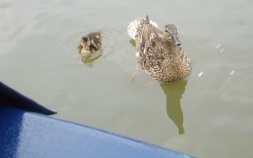 or doze on the bank behind our mooring. 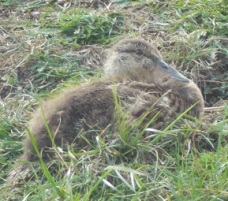 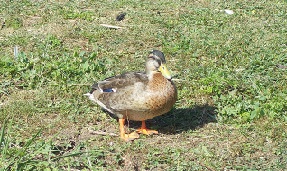 I am a retired number cruncher with a vivid imagination and wacky sense of humour which extends to short stories and poetry. I love to cook and am a bit of a dog whisperer as I get on better with them than people sometimes! We have recently lost our beloved dog Maggie who adopted us as a 7 week old pup in March 2005. We decided to have a photo put on canvas as we had for her predecessor Barney, and now have three pictures of our fur babies on the wall as we found a snapshot of my GSD so had hers done too. From 2014 to 2017 'Home' was a 41 foot narrow boat where we made strong friendships both on and off the water. We were close to nature enjoying swan and duck families for neighbours, and it was a fascinating chapter in our lives. We now reside in a small bungalow on the Lincolnshire coast where we have forged new friendships and interests.
View all posts by pensitivity101 →
This entry was posted in blogging, Challenge, Photos and tagged fpj-photo-challenge. Bookmark the permalink.