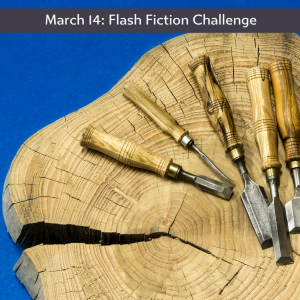 March 14, 2019, prompt: In 99 words (no more, no less) write a story that includes a chisel. Use chisel as a noun or a verb. Think about what might be chiseled, who is chiseling. Be the chisel. Go where the prompt leads!

She knew him so well.

The smile brought out the dimples in his cheeks, creating a path to the laughter lines around the eyes perfected to capture their charm, sparkle and warmth.
His chin showed strength of character. She had even managed to reproduce the scar he got from horse riding as a child.
It was her best work, but there was something not quite right.
She studied the photograph again, tracing the lines on the image and comparing them to her art.
Taking her narrowest chisel, she gently scooped away the blemish.
Not on her beloved’s face, but a blot on the photograph.

I am a retired number cruncher with a vivid imagination and wacky sense of humour which extends to short stories and poetry. I love to cook and am a bit of a dog whisperer as I get on better with them than people sometimes! We have an elderly dog called Maggie who adopted us as a 7 week old pup in March 2005. From 2014 to 2017 'Home' was a 41 foot narrow boat where we made strong friendships both on and off the water. We were close to nature enjoying swan and duck families for neighbours, and it was a fascinating chapter in our lives. We now reside in a small bungalow on the Lincolnshire coast where we have forged new friendships and interests.
View all posts by pensitivity101 →
This entry was posted in #flash fiction, blogging, Challenge, prompts and tagged #flash fiction, Carrot Ranch 99 word challenge. Bookmark the permalink.