Source CBS News
We get a supermoon when the moon is full or nearly full and also at its closest point to Earth along its slightly elliptical orbit. This close approach is called perigee by astronomers. In 2019, there are three supermoons and they fall in the first three months of the year. 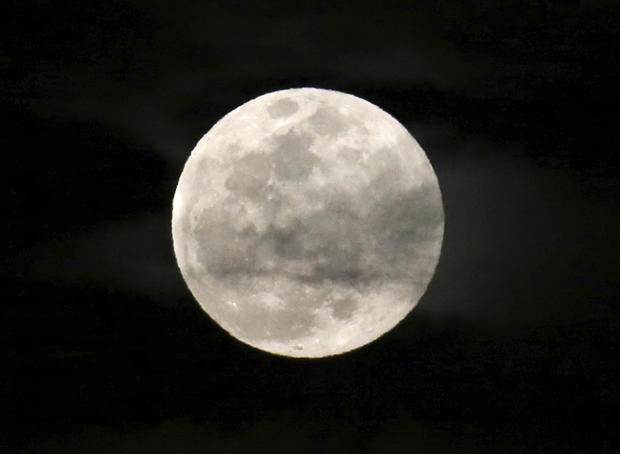 The full moon is seen in Nobeoka City, Miyazaki Prefecture on February 19, 2019; the phenomenon of “supermoon” happens when the orb is at its closest point to Earth and looks larger than usual
Katsumi Tanaka / AP

My bit:
Here in the UK:
Tuesday 19th February saw a Super Moon.
Unfortunately, the pictures I took were far less detailed:

I am a retired number cruncher with a vivid imagination and wacky sense of humour which extends to short stories and poetry. I love to cook and am a bit of a dog whisperer as I get on better with them than people sometimes! In November 2020, we lost our beloved Maggie who adopted us as a 7 week old pup in March 2005. We decided to have a photo put on canvas as we had for her predecessor Barney. We now have three pictures of our fur babies on the wall as we found a snapshot of Kizzy, my GSD when Hubby and I first met so had hers done too. On February 24th 2022 we were blessed to find Maya, a 13 week old GSD pup who has made her own place in our hearts. You can follow our training methods, photos and her growth in my blog posts. From 2014 to 2017 'Home' was a 41 foot narrow boat where we made strong friendships both on and off the water. We were close to nature enjoying swan and duck families for neighbours, and it was a fascinating chapter in our lives. We now reside in a small bungalow on the Lincolnshire coast where we have forged new friendships and interests.
View all posts by pensitivity101 →
This entry was posted in current events, Photos and tagged super moon. Bookmark the permalink.

9 Responses to ‘S no Moon