Sadje has tagged with a rather intriguing picture!
Thank you so much, I love doing these!! 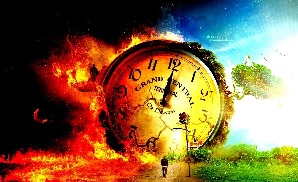 It all came down to timing.
Get it wrong and you were toast.
The old man on the late shift had been slacking and smoking one of his fat cigars.
Now the flames kept them going as he was stuck leaning against 6, 7, and 8, the time of his demise, for eternity. Smoking had certainly been detrimental to his health as he resembled the burnt ash of his habit.
Another guy was hurriedly walking past 9 hoping to make it to 12 and the bright side. The beast of the fire was hot on his heels and about to pounce.

Damn. The signal lights were on red. He could not move and had to wait.
He laughed out loud.
Time waits for No Man sprang to mind and yet here he was waiting for Time.
He could feel the heat as the burning tongues edged towards him. As long as he stayed within the shimmering beam of the 5 o’clock shadow, he was safe.
Or so he thought.
The lights weren’t changing and he felt his transition time had run out.

Who to tag now I wonder.
This is my choice of picture from pixaby.com

No obligation of course, and should you wish to choose our own picture afterwards and tag three more participants, please do.

I am a retired number cruncher with a vivid imagination and wacky sense of humour which extends to short stories and poetry. I love to cook and am a bit of a dog whisperer as I get on better with them than people sometimes! We have an elderly dog called Maggie who adopted us as a 7 week old pup in March 2005. From 2014 to 2017 'Home' was a 41 foot narrow boat where we made strong friendships both on and off the water. We were close to nature enjoying swan and duck families for neighbours, and it was a fascinating chapter in our lives. We now reside in a small bungalow on the Lincolnshire coast where we have forged new friendships and interests.
View all posts by pensitivity101 →
This entry was posted in blogging, Challenge, fiction, photoprompt and tagged fiction, tag prompt, tell the tale. Bookmark the permalink.

15 Responses to Tell the Story: 13 February