I’ve mentioned before that a buzzard used to visit our garden when we lived in Poole and was rather partial to smokey bacon.
We’d first seen him sitting on the lamppost in the main road that ran at the bottom of our garden . Our estate was higher than the road, which used to be the old railway line and was now the main HGV route to Poole Port.
Some weeks later, I threw some fatty bacon out onto the garage roof when I saw him and was surprised that he came for it. 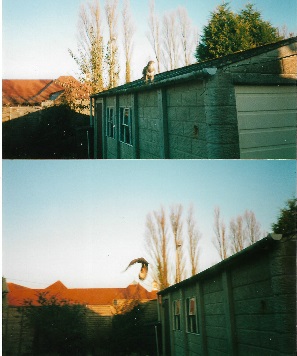 We called him Claude when he became a regular visitor, and at one stage flew over our house to sit on the wall opposite the kitchen as if to say ‘Where’s my breakfast!’

I haven’t got photos of that, nor the time when we were sitting on the wall feeding him scraps and he was just a few feet away. Once he was even sitting on our gate post. 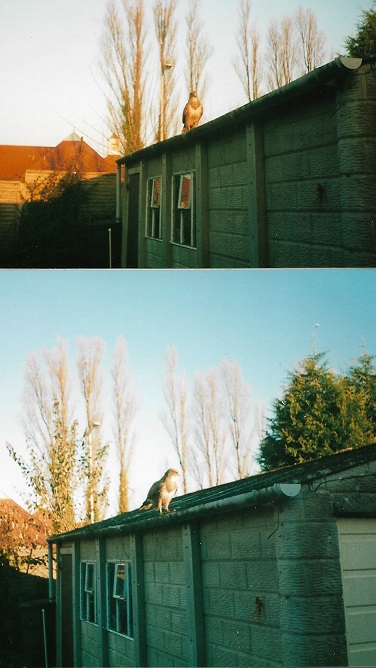 We always knew him in flight as he had a notch in his wing.

He stopped coming so close though and we think that a neighbour frightened him away. We always appreciated he was wild, but it was so lovely to see this magnificent bird of prey close up. He stayed in the area though, adopting his original perch on the lamppost.
My pictures don’t do him justice.

I am a retired number cruncher with a vivid imagination and wacky sense of humour which extends to short stories and poetry. I love to cook and am a bit of a dog whisperer as I get on better with them than people sometimes! We have recently lost our beloved dog Maggie who adopted us as a 7 week old pup in March 2005. We decided to have a photo put on canvas as we had for her predecessor Barney, and now have three pictures of our fur babies on the wall as we found a snapshot of my GSD so had hers done too. From 2014 to 2017 'Home' was a 41 foot narrow boat where we made strong friendships both on and off the water. We were close to nature enjoying swan and duck families for neighbours, and it was a fascinating chapter in our lives. We now reside in a small bungalow on the Lincolnshire coast where we have forged new friendships and interests.
View all posts by pensitivity101 →
This entry was posted in Memories, nature and tagged buzzard, Claude, nature, observations. Bookmark the permalink.