Sue has given us a slightly different photo for her challenge  this week: 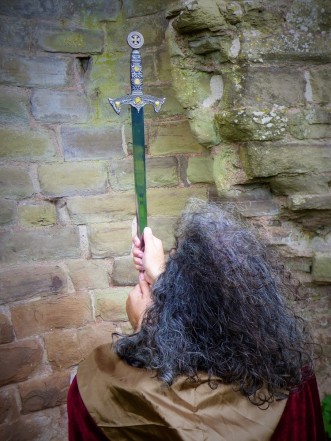 Legend had it the owner of this sword would have riches and power beyond their wildest dreams. Had he not witnessed it first hand? Seen with his own eyes the glory and spoils of victory?
Holding the blade aloft, he chanted the ritual words, allowing the tip to cut into his skin and his blood to flow over the cold steel.
He had not anticipated the pain.
Nor the blinding glow of green that emitted from the blade as it trembled in his hands.
‘False God! Liar! Traitor!’
The voices echoed around his head as he slid to his knees.
The Sword of Truth did not lie.
The wound became a torrent and he felt his life’s energy drain from his body.
His last thought was how he wished he had left well alone and not stolen the weapon from the sleeping King.

I am a retired number cruncher with a vivid imagination and wacky sense of humour which extends to short stories and poetry. I love to cook and am a bit of a dog whisperer as I get on better with them than people sometimes! We have an elderly dog called Maggie who adopted us as a 7 week old pup in March 2005. From 2014 to 2017 'Home' was a 41 foot narrow boat where we made strong friendships both on and off the water. We were close to nature enjoying swan and duck families for neighbours, and it was a fascinating chapter in our lives. We now reside in a small bungalow on the Lincolnshire coast where we have forged new friendships and interests.
View all posts by pensitivity101 →
This entry was posted in blogging, Challenge, photoprompt and tagged #write photo, photo prompt. Bookmark the permalink.