I read a post from Fandango this morning which drew out the number cruncher in me and got my mind thinking.

I’m a windbag, gasbag, chatterbox, aka I talk a lot. Or at least I used to.
At school, I wrote a lot on subjects that interested me, which to be honest weren’t that many. A couple of times I did thirty page essays, and in hindsight I wonder if the teacher actually read them and just handed out the Star for effort.

Regular readers know I’m an old hand at writing letters. These days the heart is willing but the hands are stiff with arthritic nobbly joints, yet I still do it occasionally, though they’re a far cry from the 16 to 20 page letters I used to write to Mum years ago.
My longest letter was 67 sides, to a guy in the army stationed in Ireland when I was about 15. I could say it was small paper and my writing was big, but it was a standard A5 writing pad (I used over half of it) and my writing was of average size. I hope he enjoyed reading it, however many days it took to get to the end.

Fandango’s data and how he has modified his blogs was interesting, so out of curiosity I looked my figures up.
Like him, when I first started my blog, my posts were long. I don’t remember getting a TL;NR comment though, just not many likes and very little traffic.
I have to admit length can put me off as I lose interest, the thread or the plot before I’m halfway through.
This is a partial screen print of my figures since I started in September 2013: 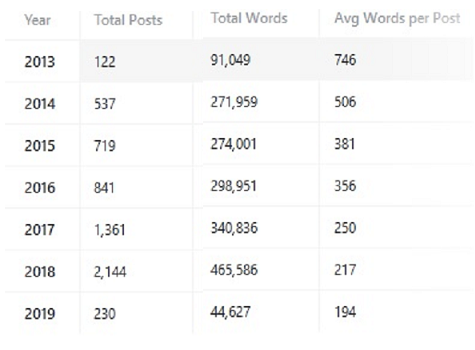 Like Fandango, I’ve cut back on my word content, and most of the challenges I do now are word counted anyway which helps.
Wonder if I’ll crack the half million by the end of the year?

I am a retired number cruncher with a vivid imagination and wacky sense of humour which extends to short stories and poetry. I love to cook and am a bit of a dog whisperer as I get on better with them than people sometimes! We have an elderly dog called Maggie who adopted us as a 7 week old pup in March 2005. From 2014 to 2017 'Home' was a 41 foot narrow boat where we made strong friendships both on and off the water. We were close to nature enjoying swan and duck families for neighbours, and it was a fascinating chapter in our lives. We now reside in a small bungalow on the Lincolnshire coast where we have forged new friendships and interests.
View all posts by pensitivity101 →
This entry was posted in blogging, diary, Just a thought, numbers, observations and tagged blogging, figures, stats. Bookmark the permalink.

14 Responses to Reading, Learning and Adapting