Diana has given us this fantastic Pixabay image by Marianne Sopala this month.
You can check out her February challenge here
https://wordpress.com/read/feeds/47652712/posts/2157235242 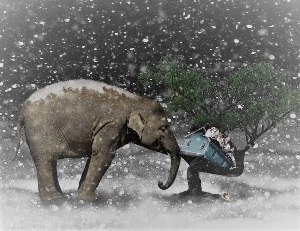 Of  Mice and Elephants

“Oh come on”, he said. “Don’t be silly. I’m not going to hurt you.”
‘It’s the other way round you great buffoon! You’re supposed to be afraid of us!’
“Why?  And I’m an elephant, not a buffoon. Buffoons have big teeth and red bottoms…”
‘That’s baboons you idiot’.
“Oh. Well, either way, I’m not going to hurt you. It looks like you could do with some help there. Let me give you a little push and a lift.”
‘We don’t want a push or a lift thank you very much! ‘
“But your house isn’t very safe where it is. I can lift you onto my back with my trunk and carry you to a better place.”
‘Oh yeah? And where might that be?’
“My herd isn’t far away and they take shelter in a forest that is so dense, the snow can’t penetrate. You’ll be warm and safe, I promise.”
There was a squealing conflab as every mouse had their say.
‘OK. Thank you. We’ll just pile indoors and make sure everything’s secure, then give you the nod to lift us out of the tree and on to your back.’
“Hurry up then, my toes are getting cold”.

It was an odd sight seeing an elephant with a little house on its back walking towards a herd of other elephants just approaching the outskirts of some woods.
“Not far now.”
Two of the mice poked their heads out of the window just as one of the larger elephants looked in their direction.
MICE! came the bellow and a stampede followed.
A few minutes later the head mouse said
‘Well that was a good idea………… not. Now look at us, stuck in a tree with an elephant.’

I am a retired number cruncher with a vivid imagination and wacky sense of humour which extends to short stories and poetry. I love to cook and am a bit of a dog whisperer as I get on better with them than people sometimes! We have recently lost our beloved dog Maggie who adopted us as a 7 week old pup in March 2005. We decided to have a photo put on canvas as we had for her predecessor Barney, and now have three pictures of our fur babies on the wall as we found a snapshot of my GSD so had hers done too. From 2014 to 2017 'Home' was a 41 foot narrow boat where we made strong friendships both on and off the water. We were close to nature enjoying swan and duck families for neighbours, and it was a fascinating chapter in our lives. We now reside in a small bungalow on the Lincolnshire coast where we have forged new friendships and interests.
View all posts by pensitivity101 →
This entry was posted in blogging, Challenge, photoprompt and tagged fiction challenge, photoprompt. Bookmark the permalink.