It’s been a beautiful day today, too sunny and pleasant to stay in, so we decided to have a field trip.
When we lived in Lincolnshire before, we drove some 7 miles or so every day to a plantation and had many enjoyable walks in the woods there.
I’ve written about some of them here,  here  and here.

The woods are now about 30 miles away and have changed a lot since we left the area in 2014. The forestry commission have cut down a lot of the trees and thinned out a lot more. I took these photos in January and March last year.

The ones with the orange dots and lines were for felling, and a lot of the areas we used to walk were almost unrecognisable as they were so bare. 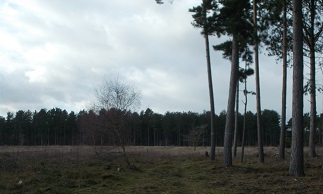 Today it was nice to notice that the road has been resurfaced. Not patched like they usually do but a proper job so it was a pleasure to drive down a road with no potholes in it!
We parked up at the top and Maggie was excited at new smells that eventually seemed oddly familiar.
The Humpy Pumpy track (left) is still there, but another pathway has been made alongside it. This one runs closer to the road but may well meet up with ours further down. 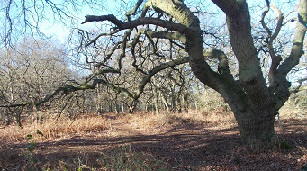 Maggie didn’t go too far ahead, but we were wearing our yellow coats today so that if she lost sight of us, we would be easy to locate.
Where some of the trees have been cleared here revealed a track that could well have been the basis for a stream. We hadn’t noticed it before and although we followed it a little way, it suddenly dipped and disappeared into the undergrowth so we had to turn back.
We passed the exit side of Maggie’s wood which is more overgrown now and again another pathway has been forged in that rank of trees.

Humphrey’s Stump is still there as is one of the many tracks that interweave and cross throughout the plantation. To walk the complete perimeter is 3.27 miles. 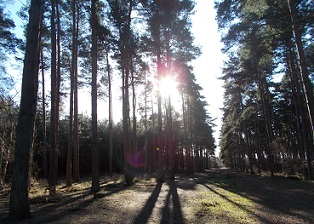 Photo: Humphrey’s Stump taken Jan 2018 and the track leading to it taken today.

We found another favourite short cut, or should I say Maggie did, though this one is wider now than when we first found it and is being used a lot by horses (mind your step!).
Being at the top of the woods, although there were a lot of dog prints (and they were pretty big!) apart from two poo bags left by a tree, we saw no abundance of dog droppings, which made a pleasant change, though Hubby did manage to tread in some.

We were walking for almost an hour, Hubby found some ladybirds on some greenery, so Spring is in the air. 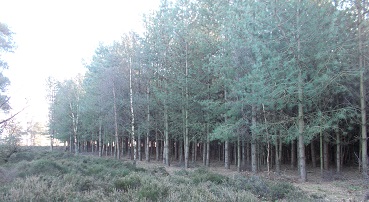 Walking back to the car, we passed a debris shelter, complete with ‘couch’ inside. 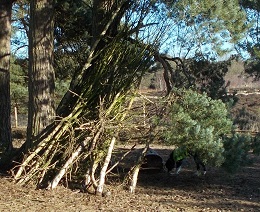 These were quite numerous in the warmer months, though most were off the beaten track and out of sight of passers-by. The site was always kept clean and clear of rubbish. 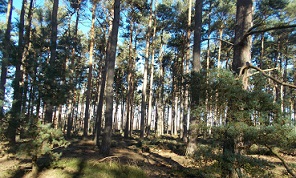 It’s possible that the forestry commission will leave things alone for a while since their last thinning episode so that the trees can bulk up and grow having more sunlight and space.
The thing is in doing so, the heart of the woods has been ripped out. We found no deer prints and although we saw a few wagtails and sparrows, there was no bird song either.

I am a retired number cruncher with a vivid imagination and wacky sense of humour which extends to short stories and poetry. I love to cook and am a bit of a dog whisperer as I get on better with them than people sometimes! We have an elderly dog called Maggie who adopted us as a 7 week old pup in March 2005. From 2014 to 2017 'Home' was a 41 foot narrow boat where we made strong friendships both on and off the water. We were close to nature enjoying swan and duck families for neighbours, and it was a fascinating chapter in our lives. We now reside in a small bungalow on the Lincolnshire coast where we have forged new friendships and interests.
View all posts by pensitivity101 →
This entry was posted in current events, diary, Maggie, nature, observations, walks and tagged memories, walks, woods. Bookmark the permalink.