This week’s photo is provided by Dale Rogerson. You can check out Rochelle’s challenge and how to participate here 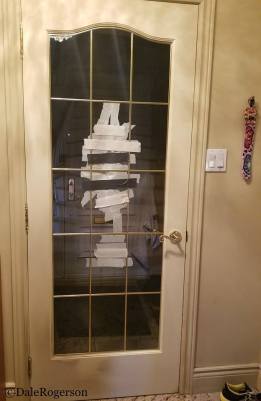 The trauma of her abuse went beyond imagination.
This was how she saw herself in her nightmares, a broken being held together with sticky tape.
Her neck was a bit skinny perched precariously on her shoulders, but she felt she’d got the angle of her head just so, her blindfolded eyes downcast, nose in profile and mouth silenced.
She couldn’t get her hair quite right, continually building it up rather than stripping it off the surface and starting again.
She said she no longer had a body.

With tears in their eyes, the doctors wondered how they could help her.

My apologies for such a dark piece, it just turned out that way.

I am a retired number cruncher with a vivid imagination and wacky sense of humour which extends to short stories and poetry. I love to cook and am a bit of a dog whisperer as I get on better with them than people sometimes! We have an elderly dog called Maggie who adopted us as a 7 week old pup in March 2005. From 2014 to 2017 'Home' was a 41 foot narrow boat where we made strong friendships both on and off the water. We were close to nature enjoying swan and duck families for neighbours, and it was a fascinating chapter in our lives. We now reside in a small bungalow on the Lincolnshire coast where we have forged new friendships and interests.
View all posts by pensitivity101 →
This entry was posted in #flash fiction, blogging, Challenge, photoprompt and tagged #friday fictioneers, fiction. Bookmark the permalink.