Your prompt for JusJoJan 2019, January 15th is brought to you by Kelli!  Kelli’s word for our prompt today is “Paris.”

I’ve only been to Paris once and that was when Euro Disney first opened and we went over with some work colleagues at a discounted price through our Sports and Social Club.
There were three coaches and we went over on the overnight ferry.
Every coach had several young children aboard, and being a long journey, you can imagine some were tired, irritable and basically little horrors.
We were lucky that the two youngsters behind us were quite sociable, and we ended up entertaining them with a puppet show in the back seats.
Said puppets were in fact our two benny hats, which happened to be different colours, and we did a sort of impromptu Sooty and Sweep. 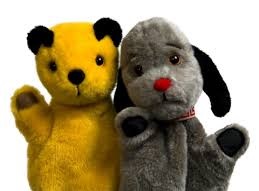 This was just for the kids you understand, but the adults in the next four rows were equally enthralled!

I am a retired number cruncher with a vivid imagination and wacky sense of humour which extends to short stories and poetry. I love to cook and am a bit of a dog whisperer as I get on better with them than people sometimes! We have recently lost our beloved dog Maggie who adopted us as a 7 week old pup in March 2005. We decided to have a photo put on canvas as we had for her predecessor Barney, and now have three pictures of our fur babies on the wall as we found a snapshot of my GSD so had hers done too. From 2014 to 2017 'Home' was a 41 foot narrow boat where we made strong friendships both on and off the water. We were close to nature enjoying swan and duck families for neighbours, and it was a fascinating chapter in our lives. We now reside in a small bungalow on the Lincolnshire coast where we have forged new friendships and interests.
View all posts by pensitivity101 →
This entry was posted in blogging, Challenge, word prompt and tagged #JusJoJan. Bookmark the permalink.
Loading Comments...
Comment
×
<span>%d</span> bloggers like this: