Big mistake.
When will we learn that if we PLAN anything, it goes belly up!
I suppose the good news is that there wasn’t actually a lot of planning involved today in what we’d intended to do.
Just a field trip somewhere, and we hadn’t decided exactly where anyway.

These past few mornings I’ve been awake around 6.30, just enough time to surface gently before the dog starts jumping off and on the bed as is her subtle hint she wants to go out. Ignore her at your peril. Not that she’s likely to squat her bot indoors, more of pawing your head until you take notice.
Hubby was awake first this morning, so he donned outer clothes and let her out into the garden.
Not a very nice morning actually, and when I pulled back the curtains I was met with a wall of fog.
I can’t remember the last time it was this thick. I couldn’t see the end of the garden anyway, and looking out of the kitchen window, the flats and crow tree were missing as my view was simply GREY! 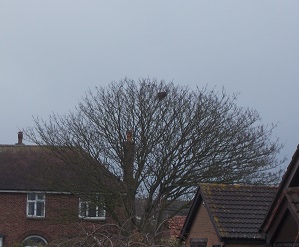 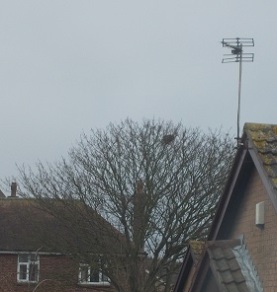 Photos taken of crow’s nest in tree on April 1st.

We shelved plans to go anywhere and decided to walk up into town along the prom.
Coming up the slope, it was eerily silent, no crashing of waves or calling of gulls, as if the fog was absorbing all sound.
We could hardly see the shore line, but where we could, the waves rolling in were high and deep.

The cafe was still closed when we got into town, so we walked a little further and got chatting to a couple with one of the fluffiest GSDs I’ve ever seen. She was almost 10 and had had surgery on the ligaments in her hind legs earlier this year.  She wasn’t all that interested in us or Maggie for that matter, but she was gorgeous. No fuss as such, but I did get a sniff from her and was able to sneak in a pat or two.

We went into the cafe and had tea and cake. Actually I had coffee and cheesecake for breakfast and Hubby had tea and carrot cake, all very nice and enjoyed in front of a log burner.
Coming out, it was like a Springer Spaniel convention, they were everywhere, and I’m not just talking one or two! I counted six on the beach and three on the prom, and all were liver and white. Maggie is only half springer and of the monochrome variety, but she was sociable with them all and they with her. We remember when she had the speed to chase balls, and I think maybe she was thinking about those days too as she looked back at us with what looked like a wistful expression on her face. The heart and mind are willing, but the body and arthritis don’t play ball, though she forgets sometimes and has her moments.

Photos from October 2017 eyeing up a crow to chase.

We got home at 11.30 and I started dinner, then as soon as that was in the oven, we did part two of our plan today and put the bird feeder up. No takers to the fat balls, seed or pork pie pastry as yet, but hopefully tomorrow word will have gone out that there’s a new bird cafe in town.

The fog sort of lifted this afternoon, but we’ve had another quiet day and may have our field trip tomorrow……… or at the weekend……. or sometime in the New Year.

I am a retired number cruncher with a vivid imagination and wacky sense of humour which extends to short stories and poetry. I love to cook and am a bit of a dog whisperer as I get on better with them than people sometimes! In November 2020, we lost our beloved Maggie who adopted us as a 7 week old pup in March 2005. We decided to have a photo put on canvas as we had for her predecessor Barney. We now have three pictures of our fur babies on the wall as we found a snapshot of Kizzy, my GSD when Hubby and I first met so had hers done too. On February 24th 2022 we were blessed to find Maya, a 13 week old GSD pup who has made her own place in our hearts. You can follow our training methods, photos and her growth in my blog posts. From 2014 to 2017 'Home' was a 41 foot narrow boat where we made strong friendships both on and off the water. We were close to nature enjoying swan and duck families for neighbours, and it was a fascinating chapter in our lives. We now reside in a small bungalow on the Lincolnshire coast where we have forged new friendships and interests.
View all posts by pensitivity101 →
This entry was posted in beach walks, current events, diary, Dogs, Maggie and tagged beach walk, day to day living, plans. Bookmark the permalink.