No glorious sunrise this morning as it’s misty but extremely mild.
We walked along the prom and there were more people out today with their dogs.
Town itself is empty. Everywhere is closed, though there was some life in the cafes which were planning to open at ten this morning.
Everyone nodded or returned our ‘good mornings’ and Maggie was very sociable with the other dogs.

No plans today, apart from putting up our new bird feeder. We have two more pressies each to open which we’ll do after lunch when we settle down to watch another of our DVDs.

How are you on collective nouns?
Just something that came up as we were walking along.

Only four geese on the lake this morning, one of which has a damaged wing and  we haven’t seen it fly, so chances are one was its mate and the others two young males.
I believe it is a gaggle of geese, but what of seagulls? Flock probably, but knowing what scavengers they are, maybe an opportunist of seagulls would suit them better.
The ducks were also in full voice, so maybe a chorus of ducks could apply there. 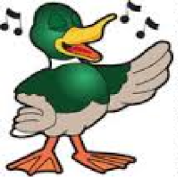 It’s a murder of crows and a parliament of owls, but how about making one up to describe the animals or birds concerned, like a lodge of beavers or a laugh of hyenas?
I came up with a cascade of starlings as I thought of all those wondrous shapes they make in flight.
I remember a girl at school suggested an enchantment of horses which teacher was very taken with. The class all liked it, so perhaps it wasn’t necessarily down to the fact that she was the daughter of a colleague.

Have a Happy Day everyone.

I am a retired number cruncher with a vivid imagination and wacky sense of humour which extends to short stories and poetry. I love to cook and am a bit of a dog whisperer as I get on better with them than people sometimes! In November 2020, we lost our beloved Maggie who adopted us as a 7 week old pup in March 2005. We decided to have a photo put on canvas as we had for her predecessor Barney. We now have three pictures of our fur babies on the wall as we found a snapshot of Kizzy, my GSD when Hubby and I first met so had hers done too. On February 24th 2022 we were blessed to find Maya, a 13 week old GSD pup who has made her own place in our hearts. You can follow our training methods, photos and her growth in my blog posts. From 2014 to 2017 'Home' was a 41 foot narrow boat where we made strong friendships both on and off the water. We were close to nature enjoying swan and duck families for neighbours, and it was a fascinating chapter in our lives. We now reside in a small bungalow on the Lincolnshire coast where we have forged new friendships and interests.
View all posts by pensitivity101 →
This entry was posted in beach walks, current events, diary, Just a thought, Walk Thoughts and tagged birds, collective nouns, walk thoughts. Bookmark the permalink.