There was a large red sack waiting for me on the settee this morning, and a load of little silvery parcels strewn around the bottom of the tree for Hubby.

Cards were both handmade, and mine is adorable.

This was the one I made for Hubby

I excelled myself over dinner. The chicken and gammon were cooked to perfection, and Hubby had managed to get 16 stuffing balls out of the mix, so we have loads for tomorrow!
We had lots of different veg, pigs in blankets, roast potatoes, a small yorkshire pudding and proper gravy. Maggie also did very well with gammon and chicken, a boiled potato, 2 pigs in blankets and a dribble of gravy.
We’d walked her again just after 10.30, so when we came back, I put the dinner on so that we had it at a sensible time and hopefully it wouldn’t give us too much reflux.

It’s usually the norm to open our presents after dinner, but as it was just the two of us, we’ve been opening them more or less all day.
Our gifts to each other included a rubber, geometry set, hole punch, electric toothbrush, marshmallows, fudge, bath bombs, chocolate reindeer, puzzle books, scarf, oven gloves, a teddy bear candle, a penguin ornament and a little cuddly dog. We have two more parcels each to open tomorrow. These are all from our £10 dash, so we did OK didn’t we!

Maggie of course had her new baby: 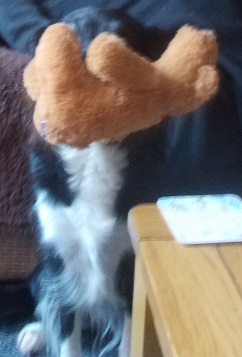 It was soon tucked in with the rest: 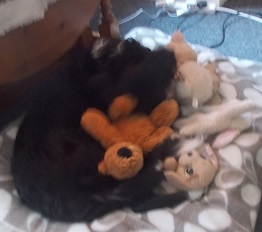 After lunch, we went for another walk and then settled down to watch one of our new DVDs on our Us present.
We settled on the new Bladerunner film, but will have to watch it again as Hubby fell asleep and I got a bit confused. It’s over two and a half hours long but I enjoyed what I could follow.

It’s been a wonderful day. Now we just need to walk the dog for her final wee and then retire for the night. We should all sleep pretty well!

I am a retired number cruncher with a vivid imagination and wacky sense of humour which extends to short stories and poetry. I love to cook and am a bit of a dog whisperer as I get on better with them than people sometimes! In November 2020, we lost our beloved Maggie who adopted us as a 7 week old pup in March 2005. We decided to have a photo put on canvas as we had for her predecessor Barney. We now have three pictures of our fur babies on the wall as we found a snapshot of Kizzy, my GSD when Hubby and I first met so had hers done too. On February 24th 2022 we were blessed to find Maya, a 13 week old GSD pup who has made her own place in our hearts. You can follow our training methods, photos and her growth in my blog posts. From 2014 to 2017 'Home' was a 41 foot narrow boat where we made strong friendships both on and off the water. We were close to nature enjoying swan and duck families for neighbours, and it was a fascinating chapter in our lives. We now reside in a small bungalow on the Lincolnshire coast where we have forged new friendships and interests.
View all posts by pensitivity101 →
This entry was posted in current events, diary, Maggie, My life and tagged Christmas Day 2018. Bookmark the permalink.