We had our field trip to Skeg today, and I have a new bonnet. My last one ended up in the bin at the hospital as I must have dropped it outside fighting the car parking machine. By the time someone handed it in, it was dirty and bedraggled, and of course Hubby wouldn’t have known I’d lost it.
He was able to get me a thick thermal knitted hat today and it is wonderful, as if comes down over my ears! Very cosy. Now I know how a boiled egg feels, the one that is second to be eaten and has its own hat to keep warm.

We also got Maggie a new Baby. Now that was difficult. No, really.
The toys we’d already seen were horrible, and the ones we saw today were either hard, stringy, spiky, had too many dangling bits that could drop off, or way too tough for soft gums and old teeth.
But……………………
I found a box on the bottom shelf with things in it that had torn labels or were like nothing else on the shelves and found…………………… a bear.
Now as I know Maggie doesn’t read my blog, here are some pics of Baby Bear and to give you an idea of size, that’s an AAA battery by his paw. 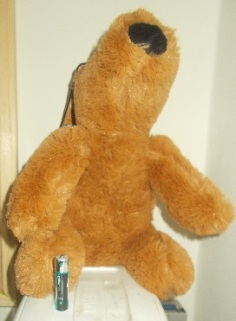 Food wise, I am all ready for the 25th, having bought a gammon joint, pigs in blankets, pork pies and cocktail sausages today. We shall be having chicken unless I can find some decently priced turkey as it’s not practical for us to have a complete bird, and quite honestly, I am not prepared to pay what they are asking in the shop for wafer thin slithers of what they deem as turkey breast escalops.
I was curious to know how much we spent on Christmas food, so did a separate sheet for it this year, same as I have one for entertainment aka DVDs and Books.
Including the mince pies, Christmas Puds, Christmas cake and turkish delight, my sheet shows a cost of less than £40. Cheap skate, aren’t I, but to be honest, we shall be having everything we like, just in moderation and the cost reflects that. I’m rather pleased actually.

As for the entertainment, that too is reasonable, just £22 on books, £19,99 on NCIS season 14, and today I splurged £22 on Incredibles 2 (who needs kids), Escape Plan 1 and 2 double bill (Stallone) and the new Blade Runner, which I got for only a fiver!
I have even managed to shave a sweet little £6 or so off our total food bill for the year, so technically speaking if I buy anything else now, it can’t come to more than £6!

Hubby has had a good day, both of us having a really good night’s sleep. I turned the light off at 10 pm and don’t remember anything until 6.30 when the dog nudged me to go out. I’ve made sure he hasn’t done too much, is resting up and taking things easy.
He’s eaten OK, is feeling better overall, and looking forward to another early night in his own bed.
I’m so glad he’s home, and thank you all for your kind comments and good wishes.

I am a retired number cruncher with a vivid imagination and wacky sense of humour which extends to short stories and poetry. I love to cook and am a bit of a dog whisperer as I get on better with them than people sometimes! We have recently lost our beloved dog Maggie who adopted us as a 7 week old pup in March 2005. We decided to have a photo put on canvas as we had for her predecessor Barney, and now have three pictures of our fur babies on the wall as we found a snapshot of my GSD so had hers done too. From 2014 to 2017 'Home' was a 41 foot narrow boat where we made strong friendships both on and off the water. We were close to nature enjoying swan and duck families for neighbours, and it was a fascinating chapter in our lives. We now reside in a small bungalow on the Lincolnshire coast where we have forged new friendships and interests.
View all posts by pensitivity101 →
This entry was posted in Bears on the shelf, current events, diary, shopping and tagged Christmas shopping, presents. Bookmark the permalink.