Photo: Offenham July 2015, our first trip to Stratford Upon Avon.

The boat was home for three years and our first trip to Stratford was our first major challenge once we’d got used to life as liveaboards.
We were boat virgins, having never had so much as a boating holiday, and for me I’d never even been on a narrowboat, let alone anticipated living on one!
Now throw into the equation locks, all of which were manually operated, and two people who basically had no idea what they were doing.

Hubby came up with the idea of driving up to the first lock and watching how it was done. I was fascinated how they worked and helped out a few times, so I was really keen to put what I’d learned into practice when our time came.
Some of those locks were hard work as the gates were heavy and I couldn’t move them on my own. Getting the boat in and out was a challenge for me as it’s nothing like driving a car!  You have thirty something feet in front of you and four behind, so it was an ‘interesting experience’ and yeah, I felt a bit like a pin ball as I nudged one gate and then the other. Still, they always said that boating was a ‘contact sport’. 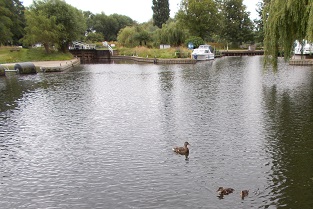 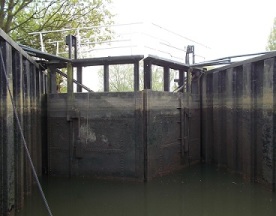 Photos: Outside and inside Luddington Lock, one of the deeper locks on the River Avon.

There were 17 locks on the river, and we completed the journey three times plus the single trip when we took the boat up for brokerage in April 2017, which was followed by our first ever trip on the canals with even more locks and the unknown.
I wouldn’t change that time, or its challenges, for anything.

I am a retired number cruncher with a vivid imagination and wacky sense of humour which extends to short stories and poetry. I love to cook and am a bit of a dog whisperer as I get on better with them than people sometimes! We have an elderly dog called Maggie who adopted us as a 7 week old pup in March 2005. From 2014 to 2017 'Home' was a 41 foot narrow boat where we made strong friendships both on and off the water. We were close to nature enjoying swan and duck families for neighbours, and it was a fascinating chapter in our lives. We now reside in a small bungalow on the Lincolnshire coast where we have forged new friendships and interests.
View all posts by pensitivity101 →
This entry was posted in blogging, Challenge and tagged fpj-photo-challenge. Bookmark the permalink.