Wordle “Back to Wordle” 19 November

Oh wow, time to get my thinking cap on with these!!! 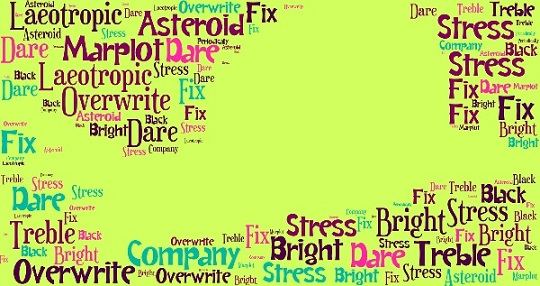 Murphy was the perfect Marplot, constantly sticking his nose where it wasn’t wanted, regardless of whose company he was in.
Periodically, colleagues tried hard to stress the importance of keeping his mouth shut or views to himself rather than dare to invoke the anger of their superiors, but it all fell on deaf ears.
However, this was an exciting day and Management had agreed to overwrite the original decision for Murphy to be excluded from the media footage and Observatory broadcast.
As the asteroid crept its way across the wall monitor, everything suddenly went black.
Murphy announced
“I can fix that!”
and started to tinker with a few buttons and levers before anyone could stop him.
There was a bright flash of light and the image on the screen began to treble in size as it gracefully but far too quickly, began a laeotropic projectory towards Earth.
“RUN!”
Murphy shouted.

I am a retired number cruncher with a vivid imagination and wacky sense of humour which extends to short stories and poetry. I love to cook and am a bit of a dog whisperer as I get on better with them than people sometimes! We have recently lost our beloved dog Maggie who adopted us as a 7 week old pup in March 2005. We decided to have a photo put on canvas as we had for her predecessor Barney, and now have three pictures of our fur babies on the wall as we found a snapshot of my GSD so had hers done too. From 2014 to 2017 'Home' was a 41 foot narrow boat where we made strong friendships both on and off the water. We were close to nature enjoying swan and duck families for neighbours, and it was a fascinating chapter in our lives. We now reside in a small bungalow on the Lincolnshire coast where we have forged new friendships and interests.
View all posts by pensitivity101 →
This entry was posted in blogging, Challenge, word prompt and tagged fiction, Mindlovesmisery’s Menagerie, Wordle. Bookmark the permalink.

2 Responses to Wordle “Back to Wordle” 19 November