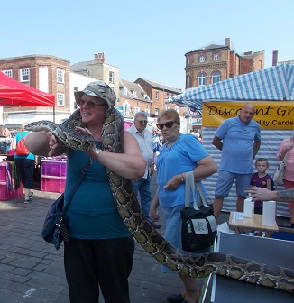 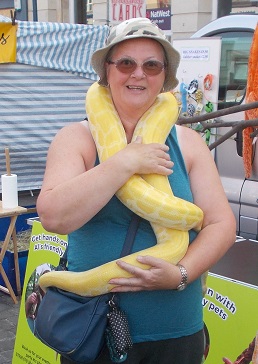 Large snakes like this don’t worry me, though these two were a lot heavier than I anticipated and I needed the table for support! 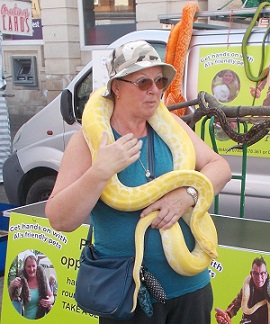 One of the darts venues here has a collection of snakes and reptiles, but obviously we are only allowed to look, not touch.

As kids, Sis and I had slow worms and lizards as ‘pets’, our grandad making an enclosure for them out of an old bird cage. We were little buggers and put the slow worms under the loo door when Mum was in there. She was not impressed and screamed that she’d kill ’em!
This little anecdote was mentioned at her funeral, though it was implied that it was just Sis who did it, not the pair of us.

I had my picture taken with a python thirty something years ago at the Oceanarium in Poole. I can still see my Mum cringing in the corner wondering how I could just sit there and let this slimy creature wind itself around me. Actually, they’re not cold, slimy or slippery at all, and it was wonderful!

I am a retired number cruncher with a vivid imagination and wacky sense of humour which extends to short stories and poetry. I love to cook and am a bit of a dog whisperer as I get on better with them than people sometimes! We have recently lost our beloved dog Maggie who adopted us as a 7 week old pup in March 2005. We decided to have a photo put on canvas as we had for her predecessor Barney, and now have three pictures of our fur babies on the wall as we found a snapshot of my GSD so had hers done too. From 2014 to 2017 'Home' was a 41 foot narrow boat where we made strong friendships both on and off the water. We were close to nature enjoying swan and duck families for neighbours, and it was a fascinating chapter in our lives. We now reside in a small bungalow on the Lincolnshire coast where we have forged new friendships and interests.
View all posts by pensitivity101 →
This entry was posted in blogging, Challenge and tagged fpj-photo-challenge. Bookmark the permalink.