I had so wanted to avoid this, but it would appear we have little choice now.
Following Hubby’s appointment yesterday, it was confirmed that we are doing all the right things but they’re not working.
Like:
Avoiding spicy food, not eating a large meal in the evening (still aiming for our main meal of the day between midday and 1 pm), eating little and often bland meals, doing a process of elimination for triggers, not too many sweet things, avoiding processed meats and foods, not eating anything after 7pm and watching the weight.
At night he is sleeping more or less upright as lying down makes the reflux worse, so rather than disturb the two girls in his life if he has to get up, he’s still in the spare room.

For the past four months, we have been working together and I think we’ve made good progress, even if it means I have to eat the tomatoes, green beans, and now onions on my own. Though saying that, we have found that by adding a teaspoon of sugar to our tomatoes when cooking, it helps to neutralise the acidity so he can have them in moderation (which is good as we’re having a two day chilli today and tomorrow).

We did a lot of talking last night about meals and food in general and agree our dietary needs are now going in different directions.
Five or six meals throughout the day doesn’t work for me and I need those extra veggies and fruit, whereas he can’t eat too much of those and needs smaller dinners.
So we have compromised.

Already breakfast is our own thing, he gets his porridge when he gets up and I prefer to get my own fruit and/cereal, so that’s not a problem. 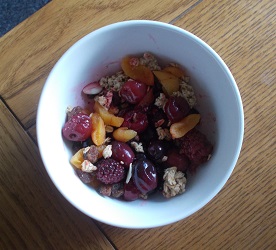 Photo: forest fruits breakfast with apricots and granola (no milk)

Our kitchen isn’t big enough for us to work independently side by side (unless we’re washing up) so we’ve agreed that I’ll cook our main meal but with smaller portions which will benefit us both, then he will get himself anything else as and when he fancies it. I’ll get myself something SW friendly around 5 pm.

It’s the only way we can do this as I’ve been getting ratty trying to plan meals which he then either doesn’t fancy or I’ve got to tweak to suit his appetite which varies day to day, and he’s been feeling guilty because he’s always hungry and snacking, or can’t eat the full meal I’ve prepared.

Today, I invested in smaller cereal bowls for the morning and we shall use our current bowls for chillis and curries, as we are already using them for our stews.
So we have gone from this (photo April 2018) 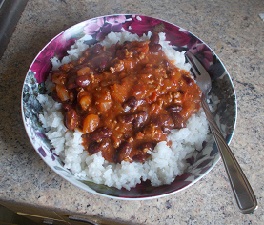 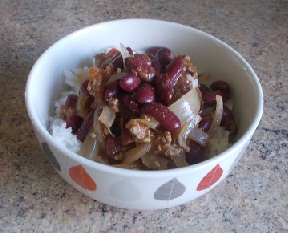 To coin a phrase, every little bit helps.

I am a retired number cruncher with a vivid imagination and wacky sense of humour which extends to short stories and poetry. I love to cook and am a bit of a dog whisperer as I get on better with them than people sometimes! In November 2020, we lost our beloved Maggie who adopted us as a 7 week old pup in March 2005. We decided to have a photo put on canvas as we had for her predecessor Barney. We now have three pictures of our fur babies on the wall as we found a snapshot of Kizzy, my GSD when Hubby and I first met so had hers done too. On February 24th 2022 we were blessed to find Maya, a 13 week old GSD pup who has made her own place in our hearts. You can follow our training methods, photos and her growth in my blog posts. From 2014 to 2017 'Home' was a 41 foot narrow boat where we made strong friendships both on and off the water. We were close to nature enjoying swan and duck families for neighbours, and it was a fascinating chapter in our lives. We now reside in a small bungalow on the Lincolnshire coast where we have forged new friendships and interests.
View all posts by pensitivity101 →
This entry was posted in budgets, change, diary, food, health, shopping and tagged diet, health, reflux. Bookmark the permalink.

27 Responses to Going our separate ways…………