Every Thursday, Sue Vincent publishes one of her photos as a writing prompt.
https://wordpress.com/read/feeds/3193846/posts/2011472864
Today’s is enchanting. 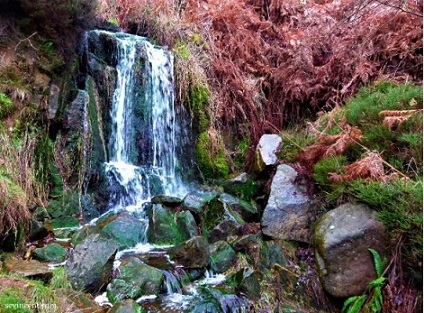 It was a magical place.
The gentle tinkling of laughter could be mistaken for the cascading water as it fell from the higher levels to the rocky platforms below.
The nymphs would come here to bathe, spreading their wings to dry as they stretched under the sun, their silken hair caressing the breeze.
If you looked closely, you could see tiny creatures dancing on the stones to the rhythm of their playful splashes.
The colours of the rainbow illuminated Nature’s bathroom, creating prisms in the waterfall.
Man had no  place here, save in their imagination.

I am a retired number cruncher with a vivid imagination and wacky sense of humour which extends to short stories and poetry. I love to cook and am a bit of a dog whisperer as I get on better with them than people sometimes! We have recently lost our beloved dog Maggie who adopted us as a 7 week old pup in March 2005. We decided to have a photo put on canvas as we had for her predecessor Barney, and now have three pictures of our fur babies on the wall as we found a snapshot of my GSD so had hers done too. From 2014 to 2017 'Home' was a 41 foot narrow boat where we made strong friendships both on and off the water. We were close to nature enjoying swan and duck families for neighbours, and it was a fascinating chapter in our lives. We now reside in a small bungalow on the Lincolnshire coast where we have forged new friendships and interests.
View all posts by pensitivity101 →
This entry was posted in #flash fiction, blogging, photoprompt and tagged #write photo, photoprompt. Bookmark the permalink.