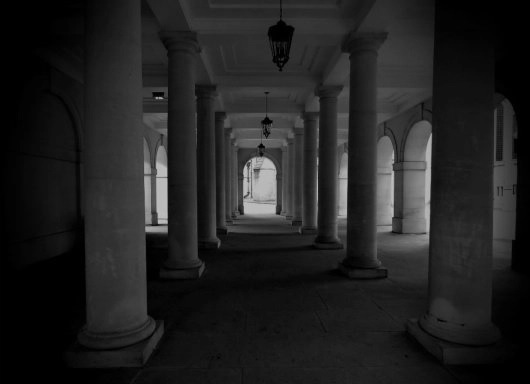 “I’m sorry, but we can’t do that”.
‘But they’re in the way!’
“I’m sorry” he repeated “but they can’t be removed. The building is almost two hundred years old and it would be a travesty to the architectural design.”
She stamped her foot.
The venue was perfect for her dream wedding.
She could see herself walking up the aisle on the arm of her father, guests both left and right, totally in awe of her entrance, the five hundred thousand dollar dress, and her fifteen little flower girls.
“I don’t care!’ she pouted. ‘I want them taken down so that the congregation can see me. Besides, they’re casting so much shadow, they’ll spoil the photographs!’
Keeping his composure when he really wanted to slap her across the face, he said
“I am sorry Miss. But you will have to find an alternative. This is a monastery, not some film set with plastic columns that can be erected or dismantled at will.”
‘DADDY! ‘ she shouted. ‘Tell this buffoon I want my wedding here, and I want those pillars demolished!’
Flashing his cosmetically enhanced smile, the billionaire put his arm round the Monk’s shoulders, almost cutting off his ear with the diamond on his pinkie in the process, and fished out his wallet with his free hand.
‘How much?’ he asked with a leering grin.
The Monk shrugged the offending arm off in disgust.
‘You can’t afford it.’  he said.
Then he walked away and closed the door in their faces.

I am a retired number cruncher with a vivid imagination and wacky sense of humour which extends to short stories and poetry. I love to cook and am a bit of a dog whisperer as I get on better with them than people sometimes! We have an elderly dog called Maggie who adopted us as a 7 week old pup in March 2005. From 2014 to 2017 'Home' was a 41 foot narrow boat where we made strong friendships both on and off the water. We were close to nature enjoying swan and duck families for neighbours, and it was a fascinating chapter in our lives. We now reside in a small bungalow on the Lincolnshire coast where we have forged new friendships and interests.
View all posts by pensitivity101 →
This entry was posted in blogging, Challenge, photoprompt and tagged #write photo, photo challenge. Bookmark the permalink.