You may recall we took Mum’s tapestries out of their frames and sewed them on to cushion covers when we got the boat.

The new settees didn’t have cushions and dividing three equally between the two didn’t work. It’s nice to sit here with our feet up, but we needed just that little bit of extra support behind us, so today we were off out to buy some cushions.

We decided to go to Skegness as there were several places we could try for soft furnishings at a reasonable cost.

That would be a No then.

I went into one jack of all trades outlet and they had small pads ranging from £1.75 to £3.50 each depending on density. They didn’t have four the same anyway or covers, so we moved on.
The next shop sold lots of cushions, all very nice, but no two were the same design or even the same colour, and reduced from £39.99 to £15.00 each make me feel faint.
They also trap you in the store as the escalator takes you up, but there is no immediate exit visible! That was tucked in the corner and I only saw it because the doors were open. This could well have triggered a panic attack as if I can’t see a way out, I tend to get nervous.
Hubby and Maggie were sitting on a bench outside so having no luck there, we crossed over.

The next shop chain has always spoilt us for choice and we have bought bedding and curtains from them before. In fact, the curtains we have up in the bedrooms now are from there. However, this particular branch has never stocked what we were after, not even dog biscuits or toothpaste, so we wondered quite honestly why we thought today would be any different.

Further down the alley was a furnishing shop and they had some beautiful cushions in the window. Inside were some wonderful displays, complete with cushions to match, but only singles. No good to us, but the starting price was getting better at £10 each.
We tried the market next, and he had loads in a variety of sizes starting from £8 each. Nothing to match our sofas so we thought about buying plain cushions and separate covers. That didn’t pan out either as he didn’t have four in one colour or design unless we wanted Audrey Hepburn or Marilyn Monroe staring up at us.

On the off-chance, we went up to the shop where we’d bought our lovely throwover that had to be thrown out after the F episode.  This was it on the now defunct sofa bed.

There was a rather nice cushion on the top shelf (isn’t it always) but she only had the one.
However, they had a second floor and she said they had a wider selection there, so I trotted down. Maggie was allowed in the shop and got fed biscuits, so they were her friends for life. I found three the same, showed one to Hubby and he shook his head. Oh well.
Anyway, we changed places and he went downstairs to look, picking up the same cushion I had, but now liking it. I noticed a fourth on display upstairs, but the lady said she thought there were four down there and joined Hubby to check. It wasn’t on the shelf with the others, but ta-dah! It had fallen down behind some on the shelf below so we had a matching four!
We got to the counter and she rang up our purchase. I asked how much we’d spent and when she told me, I said it couldn’t be right and perhaps she had better check.
‘No,’ she said.’That’s right. Four cushions for £15.’
Bargain!

They’re a coppery brown and pick up the tweedy thread in the settees.
They’re perfect too as Hubby is fast asleep opposite with one nestled in his back. 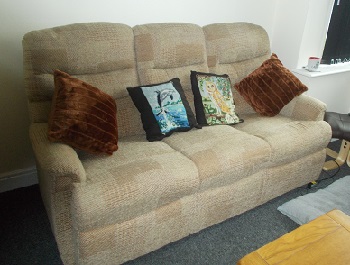 I am a retired number cruncher with a vivid imagination and wacky sense of humour which extends to short stories and poetry. I love to cook and am a bit of a dog whisperer as I get on better with them than people sometimes! In November 2020, we lost our beloved Maggie who adopted us as a 7 week old pup in March 2005. We decided to have a photo put on canvas as we had for her predecessor Barney. We now have three pictures of our fur babies on the wall as we found a snapshot of Kizzy, my GSD when Hubby and I first met so had hers done too. On February 24th 2022 we were blessed to find Maya, a 13 week old GSD pup who has made her own place in our hearts. You can follow our training methods, photos and her growth in my blog posts. From 2014 to 2017 'Home' was a 41 foot narrow boat where we made strong friendships both on and off the water. We were close to nature enjoying swan and duck families for neighbours, and it was a fascinating chapter in our lives. We now reside in a small bungalow on the Lincolnshire coast where we have forged new friendships and interests.
View all posts by pensitivity101 →
This entry was posted in current events, home and tagged comfort, home making. Bookmark the permalink.

5 Responses to Cushioning the blow